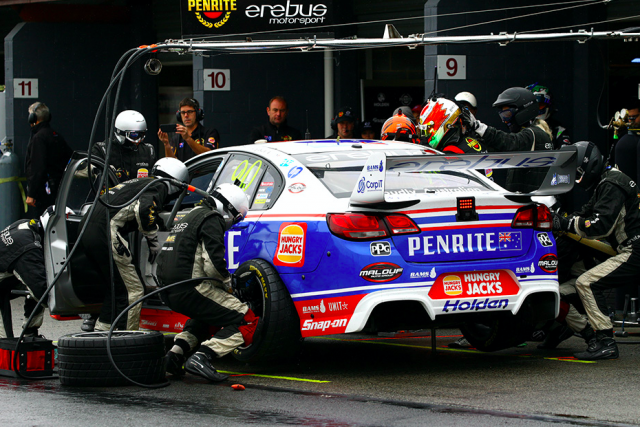 The Penrite Holden has been excluded

David Reynolds and Craig Baird have been excluded from the results of the Wilson Security Sandown 500.

The #90 Erebus Holden took the flag 20th, but has been excluded after Baird failed to complete the minimum 54 co-driver laps.

Baird ran the opening 48 laps before being replaced by Reynolds, who completed the duration of the race.

“Following and investigation and admission by Car #90, David Reynolds that he breached Rule D8.4.6.2 (Driver, David Reynolds, failing to achieve total effective resting time equal to at least one third of the total scheduled race distance), the Stewards imposed a penalty of Exclusion from Race 20,” read the statement.

Although the race only ran 143 of its scheduled 161 laps, the regulations clearly state that the minimum ‘resting time’ is set regardless of a time certain finish.

“The scheduled race distance will always be considered as the number laps listed in the Supplementary Regulations, irrespective of a time certain finish being referenced and/or applied unless, at the sole discretion of the Stewards, a reduced distance is necessary,” reads Rule D8.4.6.3.

Reynolds explained post-race that Baird’s early stop was the result of a miscommunication.

“By the time I got in the car we were a lap down and I was just trying to get my lap back,” he said of his race.

“There was a miscommunication with Craig and the engineers and he pitted too early, dropping down a lap, but that’s racing.”

Baird said that he was happy with his pace, but noted the difficulty of making the right calls in a chaotic race.

“Dave’s race pace was good; I think mine was also reasonable against the other co-drivers,” he said.

“It was one of those races that not everyone got right, and even the bigger teams, so it just shows how tough it was out there.”