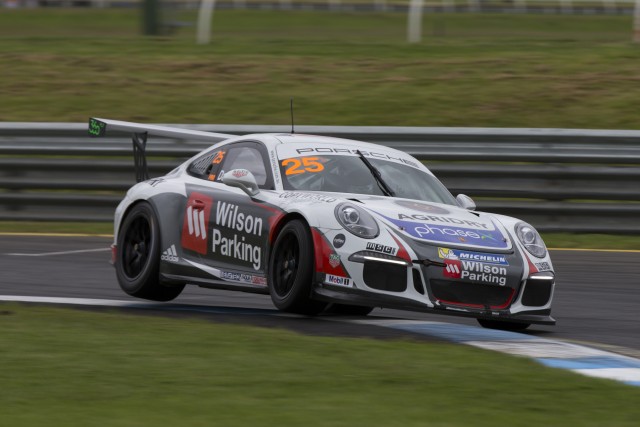 Alex Davison takes the Carrera Cup round at Sandown

Alex Davison has come through to score victory in the final race of the weekend and take the overall round win in the Carrera Cup at Sandown.

After Matt Campbell scored wins in the opening two races of the weekend, it was Davison who got the jump from the start to head Steve Richards and Campbell.

By the second lap it became apparent that Campbell had an issue with his car as he slipped down the order. He parked the 911 on lap #7 with a transmission issue with the car stuck in gear.

Campbell’s demise was extra incentive for Davison, who was not only keen to take race victory, but also close the gap in the championship chase.

Davison was able to control the gap to Richards, who was then coming under pressure from David Wall and Dean Fiore.

The slippery conditions caught a number of cars out with some losing spots, before a big crash for Tony Bates at Dandenong Road Corner.

Bates touched the grass going into the complex of corners and he speared off the track and hard into the armco fencing. The Safety Car was deployed as Bates climbed from his car.

The race was then completed under Safety Car conditions.

The overall results for the weekend had Davison in first place from Nick McBride, with Steve Richards taking third. Davison now just 44.5 points off Campbell in the championship battle.

After Bates won the first two races in the Tag Heuer Carrera Challenge, it was James Bergmuller who was first across the line in the semi-professional category. The final positions in Race #3 decided the overall honours in the Tag Heuer Carrera Challenge with Bergmuller wining from Stephen Grove and Marc Cini. Incredibly all three finished on the same points for the weekend, the tie breaker coming from the final race results.

The Carrera Cup next heads to Mount Panorama for the Bathurst 1000 weekend.