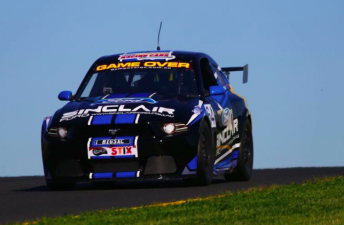 Craig Woods has won the Aussie Racing Cars’ opening heat at Sydney Motorsport Park, while the second was declared a non-result due to an opening lap melee.

Woods profited from post-race penalties to take his second race win of the season after Ben Walsh had initially beaten Peter Carr to the line by just 0.0024s.

James Duckworth had taken the early lead after a brilliant start saw him split the front row of Walsh and Kel Treseder.

Treseder, however, moved into first position by the time the Safety Car was called for the stricken Leigh Bowler, who broke a tailshaft at the start.

Walsh took the ascendancy when racing resumed on Lap 4, diving under the top two at Turn 2 with Carr following.

Carr, who twice reset the Sydney Motorsport Park lap record on his return to the category, slipstreamed ahead a lap later before Walsh reclaimed the lead on the seventh and final lap.

However, the pair were both slapped with 10-second penalties for exceeding track limits, demoting them to ninth and tenth respectively.

Duckworth repeated his startline efforts in Race 2, shooting past Woods and Treseder to lead into Turn 1.

His endeavours would go unrewarded as the race came under the control of the Safety Car before the end of the opening lap.

A clash between Micheal Rinkin and Peter Griffiths at the final corner left Pawel Faber and Ian Chivas with nowhere to go, while Charlotte Poynting was also caught up in the incident.

The race finished under yellows after just four laps, and was declared a non-result.

Woods again heads the grid ahead of the first of two further races to conclude the fifth round on Sunday.