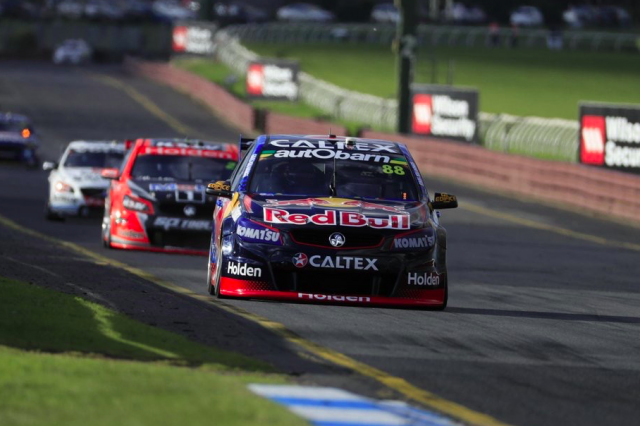 Jamie Whincup and Paul Dumbrell have secured pole position at the Wilson Security Sandown 500 for a third consecutive year.

Starting from pole thanks to Dumbrell’s effort in the co-driver sprint, Whincup repeated the dose by leading all 20 laps of the primary driver encounter.

While Dumbrell had won at a canter, Garth Tander at least kept the six-time champion honest, taking the flag just 1.2s adrift.

“We were pushed pretty hard by the HRT boys, so they’re going to be pretty hard to beat tomorrow,” said Whincup.

Tander was encouraged by the speed of his Holden and co-driver Warren Luff, who finished the early heat in third.

“We’ve got a couple of things we’ll tune for tomorrow but I’m really happy to have moved forward in both qualifying races,” he said.

Volvo twins Scott McLaughlin and James Moffat lock out the second row for tomorrow’s race after benefiting from a tangle between Fabian Coulthard and Shane van Gisbergen.

Coulthard held third until a dive from his fellow Kiwi at Turn 9 saw the Penske Ford bumped wide, dropping back to eighth.

Van Gisbergen slowed to let the Kiwi back by, only for Coulthard to back off a short time later, performing his own redress after a separate clash with Will Davison.

“I just mucked up,” admitted Van Gisbergen of his tangle with Coulthard.

“I was far enough inside but just had four wheels on the kerb.

“I’m sure he’ll complain, get on Twitter and all that stuff but it’s all good.”

Coulthard later expressed his displeasure over both Van Gisbergen’s move and the process of drivers’ being able to redress incidents mid-race.

“It’s a little bit unfair, it’s a half-arsed manoeuvre and then all you have to do is drop in behind the car that you sent off the road,” he said.

“I kind of don’t agree with it. Sometimes it works for you and sometimes it doesn’t.”

Chaz Mostert rose through the drama to fifth, marking a solid recovery after a poor start and running wide at Turn 1 saw the Supercheap Ford drop to the back of the top 10.

Mostert’s Turn 1 rejoin caused a three-wide squeeze with James Moffat and Cameron Waters that saw the Volvo elbow the Monster Ford off the circuit.

Waters was subsequently stuck in the wet grass, triggering a Safety Car to retrieve the rookie.

Sixth through 10th at the flag were filled by James Courtney, Van Gisbergen, Tim Slade, Michael Caruso and Davison.

Davison had been third at the early restart but struggled for speed throughout, losing four places in just half a lap mid-race.

Coulthard’s eventful race ended in P11 ahead of Craig Lowndes, who had started just 18th after Steven Richards’ drama in the opening sprint.

Chris Pither was 24th having started last after the Super Black Ford was disqualified for breaching the minimum tyre pressure rule in the co-driver sprint.