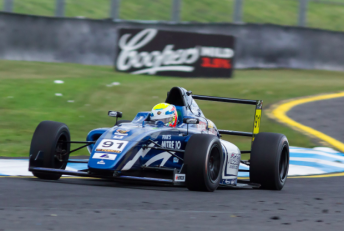 Josh Denton recorded a maiden Australian Formula 4 win after Will Brown was stripped of a second victory and excluded from the results due to a technical infringement.

Brown had produced an impressive come from behind drive to win Race 2 on the road at Sandown, having started from fifth on the grid.

The Toowoomba racer leapt to second on the opening lap before taking the lead with a slick pass on Nick Rowe on the back straight.

Once in front he held the position to the flag from Denton, who dived by Rowe at Turn 9 on the final lap.

However, a post-race inspection of the #99 Team BRM entry revealed a breach of the technical regulations promoting Denton to victory from Rowe and Jordan Love.

Harry Hayek has been awarded fourth ahead of Jack Smith and Tyler Everingham.

Brown’s exclusion will provide a much needed boost for Rowe’s title hopes after finishing Friday’s opening race in fifth.

Rowe is just 28 points adrift of Brown ahead of the weekend’s third 13 lap race on Sunday at 0905 local time. Will Brown showed his versatility as he took out the opening heat of the one-make Toyota 86 Racing Series.

Starting from second, the Formula 4 racer moved into the lead when pole-sitter Adam Gowans lost control at Turn 6 and plunged into the tyre wall on the opening lap.

Once ahead, Brown was rarely threatened on his way to the chequered flag from Luke King and Tim Brook.

King added his name to the winners list in the second race courtesy of a late move on long time leader Brown.

After winning the opening heat, the Queenslander appeared set for another victory having led until the penultimate lap.

However, Brown ran wide at Turn 1 which allowed King through to the lead. The error was severely punished with Seton, Sieders and Johnson following King through.

King held his nerve in the closing stages to take the victory from Seton, Sieders, Johnson and Brown.

Hill’s difficult day continued when he misjudged his braking for Turn 1 and clattered into the side of Brook on lap five, putting the latter out of the race.

The former Australian Formula Ford Series winner managed to continue on to 15th at the finish in front of Longhurst.