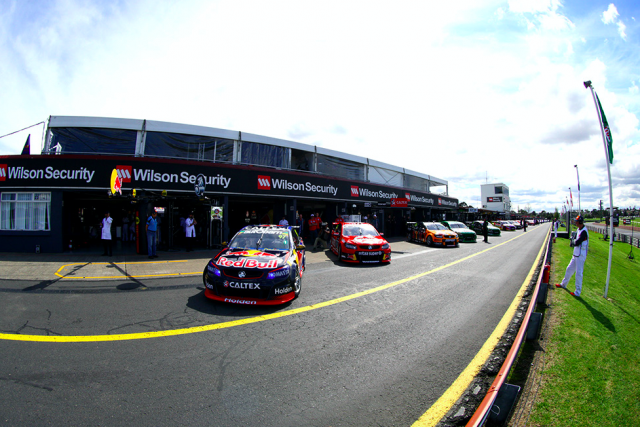 The Supercars field at Sandown

Increased degradation isn’t the only impact that the move to soft tyres will have on this weekend’s Wilson Security Sandown 500.

Debris left on the circuit from the softer rubber looms as an extra wildcard for the closing stages of Sunday’s race, which had been run only on the harder compound in previous years.

Leading co-driver Steven Richards was among those to note the prevalence of the discarded rubber during practice on Friday, where he ended up second fastest.

Although the soft tyre has been a part of the Pirtek Enduro Cup in recent years at the Castrol Gold Coast 600, Sunday will be the longest single Supercars race ever run on the quicker rubber.

“The hardest thing is dodging all the stuff that’s falling off the cars and coming out of the front spoilers,” said Richards when asked of the impact of the soft tyres.

“There’s massive big balls of rubber coming out of the cars everywhere.

“Clearly come the end of a 500km race on Sunday, if it’s dry we’re going to have a fair bit of build-up on the side of the track.

“That in itself will create a good soap opera I reckon.”

The abrasive nature of the low-grip Sandown surface is expected to see high tyre degradation.

Softs haven’t been seen at Sandown since 2011 when the category was running its previous generation cars and 17-inch rubber.

With only short runs undertaken between set-up changes during practice, today’s two 20 lap qualifying sprints will give teams their first true indication of how far they can go on the tyres on Sunday.

Although there are only three compulsory stops this year, getting through on the minimum appears unlikely given the degradation, likelihood of Safety Cars and possibility of rain.

The fastest primary driver on Friday, DJR Team Penske’s Fabian Coulthard, admits he learnt little about how the tyre will perform from his practice outing.

“With the nature of this circuit and how abrasive it is and the different surfaces, I think there’s going to be a fair bit of wear,” said Coulthard.

“But until we do a longer run at some point it’ll be a little bit of an unknown.”

Today’s track action kicks off with a final 30 minute practice session before 20 minutes of qualifying that will set the grid for a 20 lap co-driver sprint.

The result of the co-driver race sets the grid for the subsequent primary driver sprint that determines the final grid for Sunday’s 500.