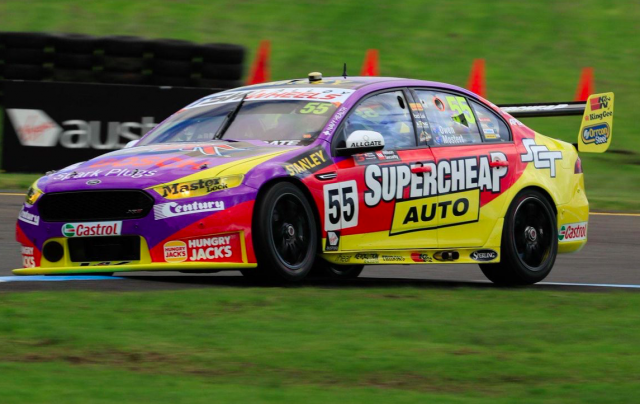 A double pole-sitter last time out in Sydney, Mostert and his Supercheap Ford again proved the benchmark over one lap at Sandown.

Mostert sat fourth in the order ahead of the final green tyre run, where he put down a 1:08.6147s to eclipse previous fast man Jamie Whincup by 0.0084s.

“That was seriously hard,” admitted Mostert.

“Three runs on tyres, we did two 8.8s and then had to dig deep in that last one.

“The guys tuned the car up a bit for that last one and the change definitely helped get that 8.6.

“One third of the job is done… but our races haven’t been strong for us this year so we’ll see where we are on tyre life.”

Whincup’s earlier effort held up for second ahead of Coulthard, who improved his time in the dying seconds but not enough to move onto the front-row.

Mark Winterbottom could manage no better than 11th, continuing his qualifying slump from Sydney.

Todd Kelly was 25th after missing the first half of the session while Nissan Motorsport undertook an engine change following an issue in Practice 4.

The upcoming 20 lap co-driver race will set the grid for the primary driver sprint, the result of which will determine the starting order for Sunday’s 500.