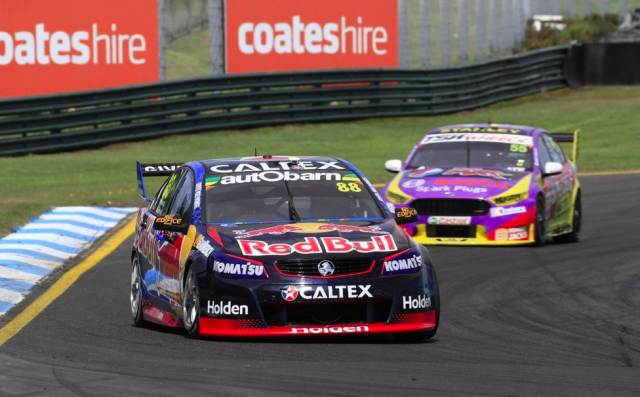 Dumbrell leads Owen on the way to victory

Starting second thanks to Jamie Whincup’s earlier qualifying effort, Dumbrell beat pole-sitter Steve Owen to the first corner and was never headed through the 20 laps.

He took the flag 7.6s ahead of Owen’s Supercheap Ford, putting Whincup in the box seat to secure the duo’s third straight Sandown pole in the second sprint.

“Obviously starting on the front-row makes it a bit easier so I’ve got to thank Jamie for that,” said Dumbrell.

“We struggled a little bit yesterday but the car is a lot better today and I’m probably a bit better dialled in myself as well.”

A battle for third between Luke Youlden and Warren Luff provided the majority of the entertainment in a largely tame race.

Youlden held the position until the penultimate lap, where Luff and then Jonathon Webb demoted the DJR Team Penske Ford to fifth.

“I was just watching what Luke’s car was doing and obviously it was using the tyres,” said Luff.

“We’re all learning as much as we can about the soft tyres on these longer runs. I think we’ve got a good car for tomorrow.”

Mark Winterbottom and Scott Pye had earlier watched on as their co-drivers Dean Canto and Tony D’Alberto tangled at Turn 1.

Canto tagged the rear of an innocent D’Alberto, whose Shell Ford spun in front of Steven Richards, delaying all three cars.

The Bottle-O Ford was given a drive-through and finished 25th, while Richards and D’Alberto recovered to 18th and 21st respectively.

“I locked an outside front which is not normal,” said Canto of the incident.

“One of the boys told me it looks like I got tagged from the rear… but I don’t know.

“It was nothing major but it didn’t end up well for our car.”

The incident was a major disappointment for D’Alberto, who had been among the fastest co-drivers yesterday.

“I nailed the start and tried to give room at Turn 1 and copped a hit in the rear,” he said.

“After that I just tried to catch the field and see what the car was like over a stint.”

Richards was equally bemused by the fracas.

“I didn’t really see what happened, but all I know is that we’ve got a bit of work to do,” he shrugged.

Chris van der Drift was the only non-finisher after suffering a left-front puncture and spearing off at the end of the back straight.