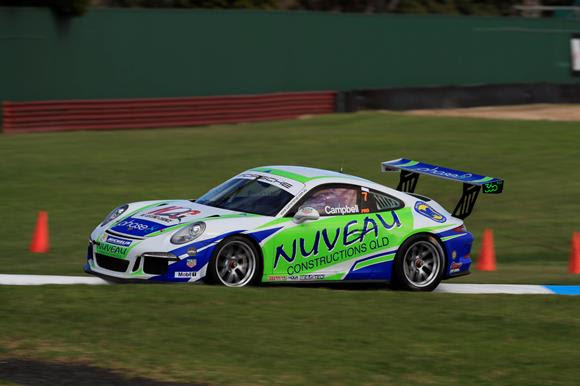 Matt Campbell has continued his winning ways in the Carrera Cup, but only after a close race with championship contender Nick McBride.

Despite starting off pole, Campbell slipped into second place behind McBride as there was plenty of action happening behind. Garth Walden and Duvashen Padayachee made contact off the start as the cars battled for position.

Campbell would sit in behind McBride until lap #11 of 16 when he dived down the inside of Turn #1 to take the lead. He needed to make the move as David Wall, Alex Davison and Steve Richards were quickly closing-in.

Campbell stayed out front from McBride, while the other positions remained status quo.

In the mix early was Ash Walsh, but on the fourth lap he looped his Porsche and finished the race in 16th place.

The main incident in the race came on lap #10, when Dylan O’Keeffe had a tyre puncture heading into Dandenong Road corner. He did well to hold onto the car, but spun in the path of Tag Heuer Carrera Challenge leader Shane Smollen. The contact was light, but pierced the radiator on Smollen’s car.

Tony Bates was forced to avoid the incident by going over the gravel trap, but was still able to take victory in the semi-professional class.

The second race of the Carrera Cup will be run later this afternoon at 2.45pm.