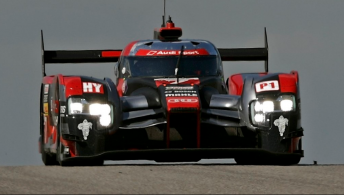 Audi has confirmed its prodigious pace by flexing its muscles to claim a one-two in qualifying for Round 6 of the World Endurance Championship at Texas.

Marcel Fassler and Andre Lotterer combined for a two-lap average 1:45.84s to pip the #8 R18 e-tron quattro of Lucas di Grassi and Oliver Jarvis who produced a 1:45.98 effort.

The #1 Porsche, qualified by Timo Bernhard and Brendon Hartley, was third fastest after the German and New Zealander combined for a 1:46.56s in the 20-minute session for LMP1 and LMP2 machines.

Toyota’s #6 TS050 Hybrid of Kamui Kobayashi and Mike Conway split the two Porsches by taking fourth with the points-leading #2 919 of Neel Jani and Romain Dumas in fifth.

Fassler and Lotterer bounced back from having an earlier time deleted due to excessive energy consumption that momentarily dropped them to P2 behind the sister Audi.

The pair’s campaign will be further strengthen this weekend for the 6 Hour race with the return from injury of Benoit Treluyer.

LMP2 pole was taken out by Nicolas Lapierre and Gustavo Menezes in the Nissan-powered Signatech Alpine with an average of 1:55.892s.

Nicki Thiim has claimed the pole in the GTE Pro class behind the wheel of the Aston Martin V8 Vantage ahead of Sam Bird in the AF Corse Ferrari 488.