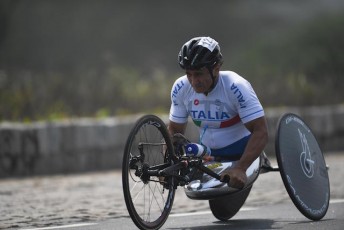 The former IndyCar champion, who lost both his legs in an horrific crash in Germany in 2001, claimed gold in the H2-H5 paracycling team relay for Italy.

The victory adds to his win in the H5 time trial a day before he took silver in the 60km road race.

Zanardi was the last to go off in the three-man relay after Vittorio Podesta put his team in third after the opening leg before Luca Mazzone put Italy into the lead as he handed over to the ex F1 and IndyCar star.

The Italian team went on to beat the US by almost 50s.

Zanardi has now claimed four Paralympics gold medals after his double haul at the London Games in 2012.