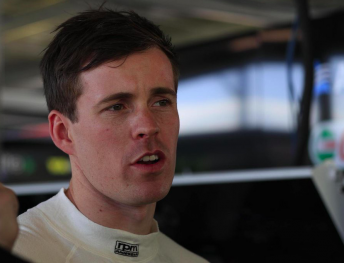 Jack Le Brocq emerged fastest in Dunlop Series practice after a frantic finish to the second session at Sandown Raceway.

The Prodrive Racing Australia driver saved his best until the dying seconds of the final 40 minute hit out as he posted a 1:09.77s effort to edge Todd Hazelwood by 0.17s.

Times tumbled as the session entered the final five minutes with Le Brocq, Hazelwood, Garry Jacobson and Richard Muscat all enjoying spells at the top of the times.

Hazelwood (Holden Commodre VF) appeared to have done enough to end the day quickest, only to be denied by last gasp effort from Le Brocq (Ford Falcon FG X).

Eggleston Motorsport’s Paul Dumbrell (Holden Commodore VE) was among a group of drivers to improve late in the running, as he jumped to third, having spent much of the session outside the top 10.

Team-mate Taz Douglas followed in Dumbrell’s footsteps by slotting into fourth ahead of Muscat, who was fastest with three minutes remaining.

Teenager Alex Rullo ran as high as fourth before sliding to 11th at the flag.

Erebus Motorsport co-driver Shae Davies ended practice in the wall at Turn 4 after misjudging his entry to the corner.

Both 40 minute sessions were littered with incidents.

The most notable being a mechanical issue for Macauley Jones and an off for Matt Chahda at Turn 1, which brought out the red flags in Practice 1 and Practice 2 respectively.

Golding, Le Brocq, Dumbrell, Davies, A Jones and M Jones will contest the Dunlop Series and Supercars’ Sandown 500 this weekend.

The Dunlop Series field returns for a 20 minute qualifying session at 0935 on Saturday ahead of two 22 lap races.