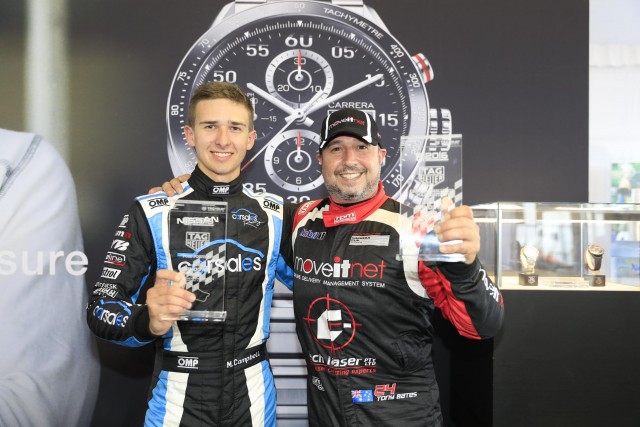 Campbell and Bates with their Carrera Cup pole awards

Matt Campbell has continued his stunning Carrera Cup form with his fifth-straight pole position ahead of this weekend’s sixth round at Sandown.

The championship leader, and winner of all races at the most recent event at Sydney Motorsport Park, Campbell set a new qualifying record in his 911 with a time of 1:09.6782, bettering his mark from last year by just under three-tenths of a second.

Campbell, along with Steve Richards, Ash Walsh, Dean Fiore and David Wall are all pulling double-duty with the V8 Supercars. Campbell is the only one who is making his debut in the Sandown 500.

Second-fastest was championship contender Nick McBride, with the second row set to be occupied by Richards and Michael Almond.

The cooler conditions and slippery track brought a number of cars unstuck, with Walsh damaging the rear wing of his Porsche in the turn 2/3 complex. Plenty of others ran through Turn 1 as they chased a fast qualifying time.

This weekend’s Carrera Cup round features two races tomorrow with the final race on Sunday.