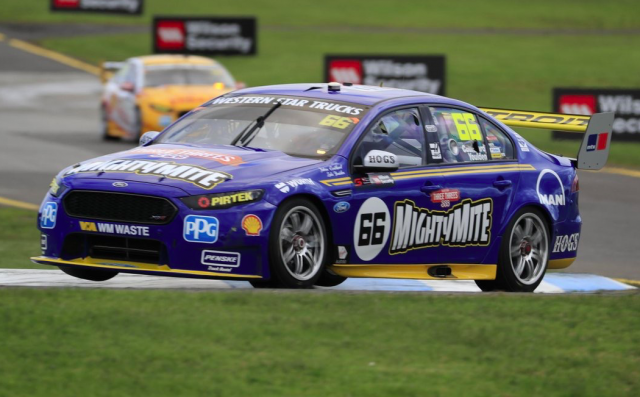 Fabian Coulthard put DJR Team Penske at the top of the order in opening practice for the Wilson Security Sandown 500.

The Kiwi’s 1:09.12s best came in the dying seconds of the 30 minute session which marked the only running available to primary drivers today.

Mostert was just 0.09s adrift of Coulthard in the final order ahead of Van Gisbergen, who also improved late, Whincup, Heimgartner and David Reynolds.

Coulthard, whose car is dressed in Team Penske’s 1972 Indianapolis 500 winning colours as part of this weekend’s retro round, ended Practice 1 encouraged by his speed.

“It’s a good start, I’d much rather be here than down the order,” said Coulthard, who will hand over to co-driver Luke Youlden for the day’s remaining sessions.

“We’ve worked hard in the couple of weeks before this round and had a test day.

“Hopefully this will put us in good stead for the rest of the weekend.”

Mostert, who is joined by Steve Owen in the Supercheap Ford for this year’s Pirtek Enduro Cup, was also happy with the balance of his car.

“The car felt pretty good out of the gate and to be honest I don’t think we’re going to be too far away.

“It’s going to be pretty low stress getting Steve up to speed. I’m pretty happy.”

Moffat’s session was momentarily interrupted by a loose drivers’ window which required a trip to the garage.

The first of the afternoon’s co-driver sessions will kick-off at 1335 local time.