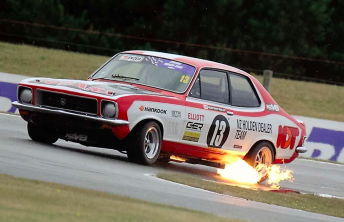 The collaboration between the two series is set to provide a grid in excess of 50 cars for the inaugural event at Mount Panorama from October 6-9.

The bumper field will contest three races culminating in a rolling start finale on Sunday.

Touring Car Masters competitors will be joined by more than 25 entries from the Central Muscle Car series, which caters for racing classics from the 1960s and 1970s.

“The cars will be the stars and we will have a collection of race cars never assembled together before like this,” said Touring Car Masters category manager Tony Hunter.

“The Sunday Wilson Trans-Tasman challenge race could be one of the best sights ever seen on the Mountain, with Touring Car Masters cars on one side of the grid and Central Muscle cars lined up on the other for an incredible rolling start.

“For many drivers racing at or in the Bathurst 1000 is a dream so for a lot of people this will be a pinnacle event of their racing careers.”

Technical regulations will be announced in the coming weeks.