Golding ready to mix it with Supercars elite 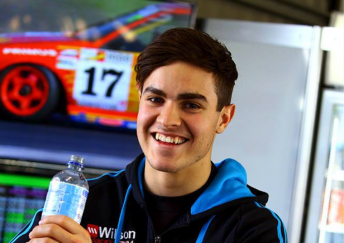 Dunlop Series star James Golding is relishing the prospect of mixing it with the Supercars regulars in the Pirtek Enduro Cup as he prepares for a full-time chance in 2017.

Rogers has declared both his McLaughlin/David Wall and James Moffat/Golding combinations as potential winners in the enduros, but appears in no rush to commit to promoting the youngster for 2017.

Golding says his main aim for the Pirtek Enduro Cup is to put in solid, mistake-free performances but adds that he has no reservations about racing wheel-to-wheel with the category’s stars should the situation arise.

“You’ve got to go in confident otherwise you’ll just get chewed up,” Golding told speedcafe.com ahead of his debut.

“As long as you’re racing hard and clean I don’t mind who it is next to me.

“We’ve got to have confidence in the team. We’re not out there to finish second, everyone is out there to win.

“We’ve got a good package. We’ve just got to put it together and have a good run.”

Golding expects his performances in the Pirtek Enduro Cup will play a “very important” role in deciding his fate for 2017, adding to the pressure to perform.

“It is stepping it up a lot from the Development Series,” he said of running in the main series.

“There’s a bit of pressure on there, but I can only do the best job I can do and if Garry thinks I’m not ready to move up then so be it.

“But I think that over this year I’ve learnt a lot more and I’m really starting to get the most out of my driving and to move up into the main series would be awesome to keep building on it. 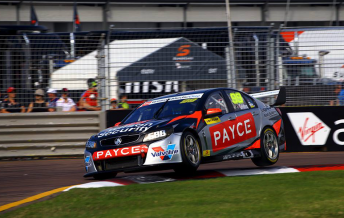 “I think that if I did the Dunlop Series again I’d sort of run it out a bit towards the end of the year and stop learning.

“You need to have other guys there that are just as fast as you racing wheel-to-wheel to keep you on your toes. That’s the most important part.

“It’s all very well to know how to do a fast lap and qualify at the front but if you can’t race no one wants you.”

Golding says that doing double duties in the Dunlop Series and Supercars Championship at Sandown and Bathurst should help both programs thanks to the similarities between the GRM built Holden and Volvos.

An apprentice mechanic at GRM, Golding usually acts as a floating third mechanic between the #33 and #34 garages as well as being a regular member of GRM’s pitstop crew.

The team has been training a new mechanic throughout the year to take over Golding’s role in the stops for the endurance races, where the youngster will almost totally focus on driving.

“I’m at the point of my career now where I’m trying to concentrate more on my driving,” he said.

“If I need to spend that little bit more time on it I really need to do it because I want to do everything I can to hopefully end up with a career in Supercars.”

Although remaining reserved on Golding’s future, Rogers makes no secret of his confidence in the former Formula Ford ace’s ability to perform in the Pirtek Enduro Cup.

“He hasn’t driven in the main game, but he’s done enough miles now in the Dunlop Series including at Bathurst last year,” Rogers told Speedcafe.com.

“I think he is skilful enough and I think he won’t be mesmerised by the fact that all of a sudden he’s got a drive in the main game with one of the leading teams.

“He’s just seeing it as part of his progress and I think that myself, Cowboy (team manager Dean Cowling), Barry (Rogers) and our other drivers have made him feel pretty positive towards that.”