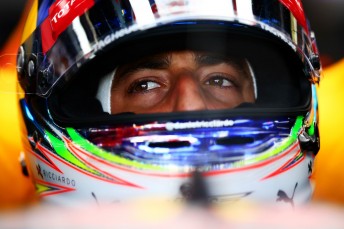 The Australian will head to the Marina Bay Circuit among the contenders for victory with the low speed, high downforce street track set to suit his Red Bull.

Singapore has proved a happy hunting ground for the 27-year-old having scored a third in 2014 followed by a second last year, just 1.5s adrift of race winner Sebastian Vettel (Ferrari).

After being denied a highly likely fourth career F1 win at Monaco in May, following a botched pitstop, Ricciardo hopes karma will repay him this weekend.

“I don’t believe in much, but if there is a little bit of karma or whatever, I’d like to think that I will get my Monaco win back somewhere,” said Ricciardo.

“Singapore is a track which I want to (win at).

“I don’t expect to be handed a victory, absolutely not, but I feel if I work very well across that weekend, then it should hopefully provide me with a chance. So Singapore is one I am looking at.”

Red Bull is expected to debut a minor engine upgrade this weekend which is likely to be the final major update to the RB12.

“We have a few little bits and pieces (for Singapore),” said Red Bull boss Christian Horner.

“Now the whole factory is focused on 2017. There are little bits and pieces (for the 2016 car) but nothing major.”