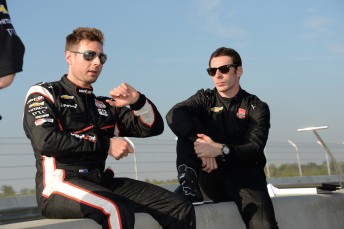 Team Penske drivers Simon Pagenaud and Will Power are set to battle it out in another tense showdown for the IndyCar Series at Sonoma this weekend.

Pagenaud has had the measure on the field for much of the season and goes into the double points round, 43 ahead of Power in what has been reduced to a two-driver stoush.

With a total of 104 points on offer (100 for the win, one for pole, one for leading a lap and two for most laps led) Pagenaud has the upper hand.

While there are a myriad of permutations, if Pagenaud finishes fourth or better he will seal the title no matter where Power finishes.

But as was the case last year at the Sonoma decider the unexpected can happen.

The Toowoomba ace has nailed five poles and three wins from seven starts against Pagenaud’s zero pole and wins tally from five starts.

“Sonoma has been good to us over the years, but I’m not sure how much that matters,” Power said.

“Every race has its own circumstances and every team has to make the needed adjustments. It will be an exciting weekend, for sure.”

Pagenaud has record four wins (equal to Power) this season however he has landed pole six times opposed to the Australian’s two.

“This is our big season finale and I’m very excited to get to battle it out on the track,” Pagenaud said.

“Now, the job for our HPE Chevy team is a little different than usual, as we are only fighting Will Power. Our season has been incredible.

“I am so proud of my team and what we have already accomplished with six poles and four wins. Now we want the championship and may the best win.”