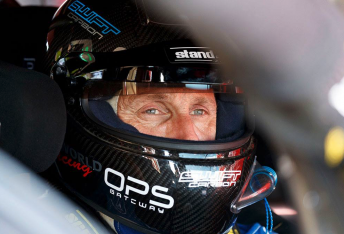 Cameron McConville is shooting for a top 10 finish in his Supercars comeback with minnow outfit Lucas Dumbrell Motorsport at Sandown.

Returning to the championship for the first time in four years, McConville joins Nick Percat in the #222 Holden which has not seen the top 10 since victory at the Clipsal 500 in March.

The 42-year-old McConville has kept himself sharp with recent outings in Australian GT and the Toyota 86 Racing Series after stepping away from his job at CAMS.

Final preparations for Sandown were completed yesterday with a 60 lap run in the LDM Commodore during a test at Winton.

While admitting the series has moved on since his last race, the Victorian says he won’t be heading to Sandown to simply make up the numbers.

“I’m genuinely excited about it to be honest,” McConville told Speedcafe.com.

“Testing at Winton used to be a bit of a chore back in the day, but I absolutely loved being back around a race team again.

“I’m under no illusions that the goalposts have moved in the four years since I have been out.

“I’ve watched the co-driver racing and it looks like a world cup final. They are all racing for sheep stations.

“Every year the series gets more competitive and so does the race amongst the co-drivers, but I‘m looking forward to it.

“I know all the co-drivers and they know I won’t be rolling out of the throttle.

“We are not there to make up the numbers and I’m not there to be at the back either but we are realistic as a team and we know it hasn’t been the best year.

“I genuinely think we are a sneaky back end of the top 10 chance if everything goes our way and I can keep my end of the bargain up.”

The former Holden Racing Team co-driver was only expected to contest this year’s Sandown 500 but will now compete in all three enduros following the withdrawal of British sportscar ace Oliver Gavin.

McConville is comfortable with the decision and excited to be able to soak up the unique atmosphere of The Great Race next month.

“I’m certainly not regretting it and thinking that I have bitten off more than I can chew,” added McConville.

“I have started to up my fitness training. There is no doubt after 60 laps in the car yesterday, they are a lot more physical than the GT cars.

“Sandown will be a good test for me but I will have a bit of work to do between now and Bathurst.

“I’m actually really excited about Bathurst and Nick (Percat) and I are talking about doing a road trip up there with a motorhome and taking in all aspects for the event,” added McConville.

“I probably didn’t do that when I was at HRT.

“To be able to be there and soak up that atmosphere and be part of it in the twilight of my career will be something special.”