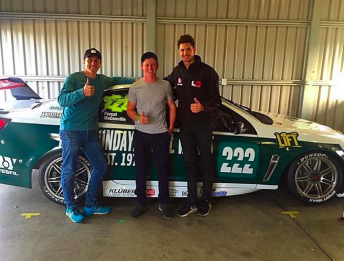 Australian Formula 4 Championship leader Will Brown has declared his intention to switch to tin-tops next season following a Supercars test with Lucas Dumbrell Motorsport at Winton.

The 18-year-old experienced his first taste of a Supercar on Tuesday with a successful 12 lap run at the rural Victorian circuit, organised by LDM co-driver Cameron McConville.

Brown completed six laps in both the #222 Nick Percat and #3 Andre Heimgartner Commodores, which has further fuelled his desire to join the Dunlop Series next year.

The teenager has focussed much of his burgeoning career in single seaters with the Queenslander competing in both the Australian Formula 4 and Formula Ford series since graduating from karting at the end of 2014.

He has since added to his commitments with a campaign in the one-make Toyota 86 Racing Series where he currently occupies second in the standings.

Although focussed on his current title aspirations, Brown says work is well underway in securing funding for a graduation to Supercars’ second tier.

“Supercars is definitely the goal for me,” Brown told Speedcafe.com.

“I haven’t really driven a tin-top with that much power, so to have a taste of what I want to do has made me want to do it even more.

“To meet everyone in a Supercars team was just as good as getting the laps in.

“The Dunlop Series is definitely something we are looking at for next year.

“We are working on sponsors for next year and if we can do the Dunlop Series we will definitely be doing it, but I think it is probably 50/50 chance at this stage.

“We are also looking at Porsche GT3 Cup Challenge as that is a bit cheaper, but the Dunlop Series is something I want to do.”

Brown is set for double duties this weekend when he lines up in the Formula 4 Championship and the Toyota 86 Racing Series at Sandown.