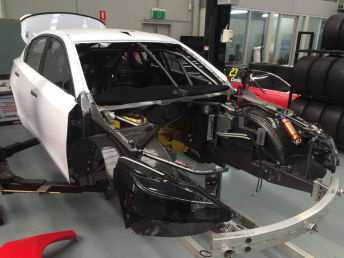 KR002 being prepared for the Supergirls wildcard

Nissan Motorsport has secured an experienced Supercars race engineer for its Supergirls wildcard entry at the Supercheap Auto Bathurst 1000.

Simona de Silvestro and Renee Gracie will work with Blake Smith, who has been out of the championship since splitting with the Holden Racing Team in June.

Smith engineered Garth Tander during two and a half seasons at the factory Holden squad, guiding the former champion and co-driver Warren Luff to the Pirtek Enduro Cup crown last year.

Relocating from Melbourne to his native Sydney and undertaking a number of consulting roles since his exit from the HRT, Smith says he’s looking forward to returning to Supercars with Nissan.

Bathurst will mark the first time that the team has run five Altimas, bringing one of its two spare cars – which was raced by Rick Kelly last season – back into service for the occasion.

“It’s great to come back for Bathurst,” Smith told Speedcafe.com.

“Obviously I don’t have the chance to defend my Pirtek Enduro Cup title, but this is an opportunity to do something new and something a bit interesting.

“I haven’t had in-depth discussions with the team’s engineering group yet, but from what I understand the fundamentals of the car are quite good.

“I believe the aero package is really strong and we’ve seen before that the cars are very quick across the top at Bathurst.

“That should give the drivers a lot of confidence in the car and hopefully help us achieve a good result.” 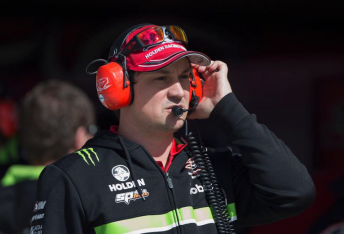 Having raced with Prodrive at Bathurst last year, De Silvestro and Gracie will have two days of testing at Winton later this month to acclimatise to their new car and team.

Smith says he was impressed by De Silvestro’s effort on debut last year and is keen to see what can be achieved the second time around.

“I was pretty focussed on my own program last year, but obviously you scale the time sheets and to be honest I was quite impressed,” he said of De Silvestro.

“Her initial pace was strong for someone who hadn’t been in these sorts of cars.

“Bathurst is a pretty daunting place and it didn’t seem to phase her at all, so I think she did a really good job.

“For Renee, coming from the Dunlop Series is a big step up. We’ve seen a few guys try that this year and really struggle.

“She had an unfortunate run up there last year but hopefully we can iron out those bugs and move forwards.”

Smith is philosophical about his exit from the HRT, which came in a dramatic reshuffle prior to Hidden Valley that also saw a race engineer change for James Courtney.

“I had a good two and a half years at HRT where we turned a lot of the operational side of the business around,” he said.

“Overall the results weren’t as good as we would have hoped, but unfortunately from time to time you can’t always achieve the objectives that you set out for yourself.

“I think in the end it was the best for both parties (to split).”