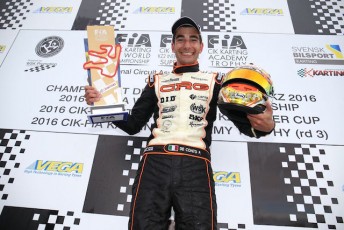 Recently crowned World Karting Champion Paolo De Conto is confirmed for the International Race of Stars powered by SuperFest on the Gold Coast.

The October 14-16 Race of Stars will see a current World Karting Champion competing in Australia for the first time in more than 20 years.

“It is a very exciting opportunity for me I’ve never been to Australia and everyone tells me the Gold Coast is beautiful,” De Conto said.

The 24 year-old Italian will join the CRG Australia team at the event.

Having previously secured the winner’s surfboard with Italian Davide Forè, De Conto is keen to make it three in a row for the team.

“It will be an honour to join the CRG Australia team for the event and hopefully make it three wins in a row for them.”

Having driven karts from the age of three, racing has been a way of life for De Conto and for the past seven years he has been a professional racer throughout the European circuit.

Since enjoying his first major success at the 2009 European Bridgestone Cup, De Conto has become a two-time European Champion and enjoyed victory at the SKUSA SuperNationals in Las Vegas, the Winter Cup in Italy and the WSK Champions Cup.

On September 4 he joined an elite club that only one Australian driver – James Courtney – is a part of by taking out the 2016 CIK-FIA World KZ Karting Championship.

Courtney, dual World Karting Champion in the 1990’s is heavily involved in the Australian karting scene through his JC Kart range.

“I’d always kept a bit of an eye on karting through the years but it was at the Race of Stars two years ago where I really reconnected with the karting scene and its been a real blast being back involved,” Courtney said.

As a part of SuperFest activities attached to the Castrol Gold Coast 600 Supercars event, the Race of Stars will be conducted at the Gold Coast Motorsport Training Centre, Pimpama.