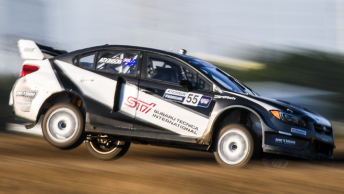 Atkinson will line-up for his second Red Bull Global Rallycross

Former World Rally Championship factory driver Chris Atkinson will line up for his second start in the Subaru Rally Team entry at this weekend’s Red Bull Global Rallycross round in Seattle.

Atkinson will continue with the squad after making his rallycross debut at the previous event at Atlantic City last month.

Atkinson’s entry will be backed by Subaru Tecnica International at the event which will be held at the Evergreen Speedway near Seattle.

Atkinson made an impressive debut in the discipline when he finished third in his semi-final before running strongly in the final until his run soured by a puncture on the opening lap.

“It was great fun in Atlantic City and I felt at home in the car pretty quickly, we had a good result besides the tyre puncture so I’m really looking forward to taking it another step in Seattle,” Atkinson said.

“I think the Seattle track should suit us well.”