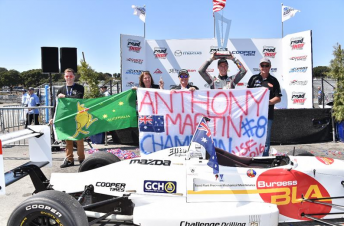 Anthony Martin has taken the most important step in his career by claiming the title in a cliffhanger finish to the season at Laguna Seca.

Martin produced a decisive move on the opening lap of the final race to take second position from chief rival and Cape Motorsports with Wayne Taylor Racing team-mate Parker Thompson.

Victor Franzoni cleared out to take the win however Martin’s solid second place ensured the title was his after the season came down to a two-driver shootout between the Australian and his Canadian team-mate Thompson.

“This means so much – and that’s all due to the Mazda Road to Indy,” Martin said.

“It was a roller coaster ride this year, swapping first and second in the championship with Parker (Thompson) but I was able to pull through with a strong run in the last half of the season.

“Without that, the championship wouldn’t have been possible and of course, without the team and my sponsors none of this would be possible.

“It is a lot of weight off my shoulders in finding the budget to do next season.”

In the opening heat of the weekend Victor Franzoni took victory in the 21-lap race.

The Brazilian showed the way from Thompson and Martin while Luke Gabin and Jordan Lloyd were fourth and fifth.

Franzoni had backed off coming to the final tour but still finished 12.9s ahead of Thompson.

By winning Martin continues a strong tradition in the series by past Australian champions including David Besnard (1998) and Matthew Brabham (2012). 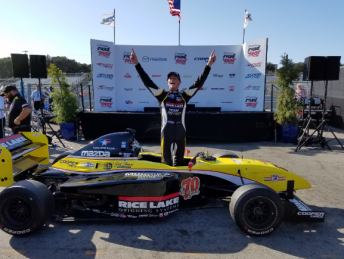 Aaron Telitz has prevailed to win the series in a tense finale at Laguna Seca.

Telitz went into the final two races of the season clutching a nine-point lead.

Pato O’Ward remained in the title hunt after winning the opening heat from Telitz while Juncos Racing’s Nicolas Dapero was third.

In the 19-lap middle heat, Telitz found himself fifth while O’Ward was the last of the classified runners in 10th with Dapero claiming the victory.

Telitz then produced a 1s win over Will Owen (Juncos Racing) while Dapero was third with O’Ward finishing sixth.

Australia’s Jake Parsons (Juncos Racing) completed a mixed season finishing with a fifth, DNF and fifth from the season-ending weekend. 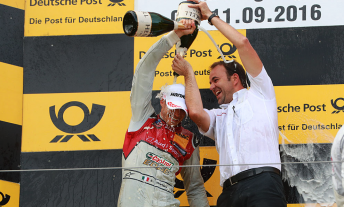 Inheriting the pole position, BMW driver Marco Wittmann took a 7.1s win in the opening 30-lap race at the Nurburgring.

The polesitter Lucas Auer incurred a five-place grid drop after using up his warnings for obstructing in qualifying before finishing seventh.

Mortara undertook an aggressive start to pick off a couple of places, after starting sixth on the grid, before continuing his charge.

Auer, determined to make up for his lost opportunity in the opening heat, was second in the Mucke Mercedes while Wittmann completed another tidy weekend in third.

Heading into the third last round at Budapest Hungary from September 23-25, Wittmann holds a comfortable lead in the standings on 170 points, 33 clear of Mortara. 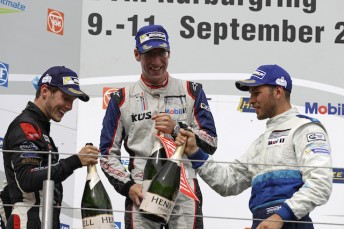 Michael Ammermuller took the honours in the opening race at the Nurburgring for Team75 Bernhard as the championship remains in the balance.

With two races remaining at the season finale at the Hockenheim circuit from October 14-16, Sven Muller (eighth and sixth at the weekend) holds a slender lead on 239 points from Engelhart (227) with a total of 40 points up for grabs. 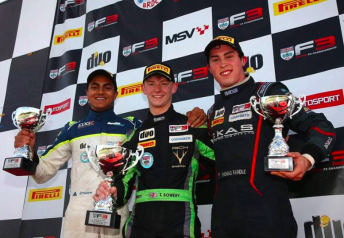 The Melbourne racer went into the Donington Park meeting with a slim chance of taking the title, lying third in the standings and 51 points adrift of leader Ricky Collard.

However, Randle’s title hopes were dashed after the opening heat when he made contact with the rear of fellow championship hopeful Toby Sowery.

Damage to his front wing saw him retire from the race, forcing him out of the championship battle.

Matheus Leist took the victory to move to the top of the standings as championship leader Collard failed to finish.

Sowery claimed the honours in the second race from Eugene Denyssen and Australian Thomas Maxwell, who secured the final spot on the podium.

Leist boosted his title hopes in fifth while Randle was left to settle for eighth.

The final race of the season saw Sowery once again take the win but it was Leist, who took the BRDC British F3 title coming home in fifth.

Enaam Ahmed pipped Randle to second as the Australian ended his maiden season in Europe on a positive note.

Countryman Maxwell ended the season seventh in the championship after recording a ninth place finish in the finale. 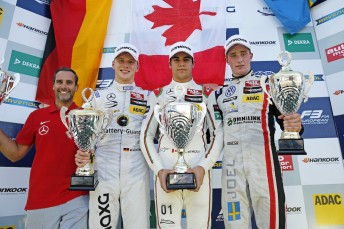 Lance Stroll extended his lead in the FIA European Championship after scoring two wins and a second place finish at the Nurburgring.

The Williams F1 development driver completed a lights-to-flag win from title rival Maximilian Gunther, taking the victory in Race 1 by 6.6s from his Prema Powerteam team-mate.

New Zealander Nick Cassidy had held second until four laps from the end when an electronic glitch on his car dropped him to fourth behind George Russell.

Stroll was made to work harder for his triumph in an eventful Race 2 which was interrupted by the Safety Car.

The 17-year-old dropped behind Gunther at the start before two separate incidents on the opening lap saw the race neutralised.

Cassidy was involved in the first clash when he made contact with Callum Ilott, which saw the Kiwi retire from the race.

Once racing resumed, Stroll followed Gunther closely before making a move for the lead on lap 17, which he held to the flag, with Joel Eriksson rounding out the podium.

Gunther denied Stroll a clean sweep in the final race as he held off the Canadian by 3.02s, with Niko Kari in third.

Stroll has opened up a 68 point lead over Gunther as the championship moves to Imola from October 1-2. 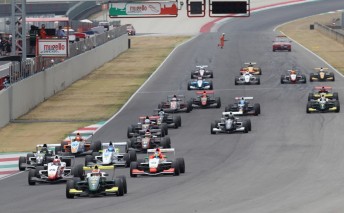 The Aussie teenager from Hobart dominated one of four cross-border rounds for the French-based Formula Renault series.

He repeated the feat in Race 2 having stormed from seventh on the grid to the victory.

Despite starting from pole in the final heat, Peroni finished second behind Chucklin, but managed to extend his championship lead to 112.5 points from Frenchman Gilles Heriau.

“I have a good points lead in the championship, but with two rounds remaining I still have to give 100 percent in every race,” said Peroni.

The championship heads to Magny-Cours in France for the next round from October 7-9. 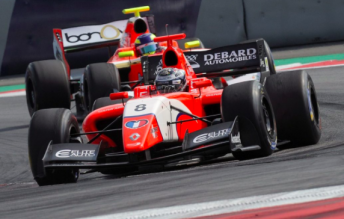 Aurelian Panis produced an impressive come from behind win in the latest round of the Formula V8 3.5 Championship at the Red Bull Ring.

Panis ran fourth before electing to make his mandatory pitstop early in the race.

The Frenchman set a blistering pace in the second half of the race to emerge in the lead once all the pitstops were completed.

He went on to take the flag by 0.6s from championship leader Tom Dillmann and SMP Racing’s Matevos Isaakyan.

Dillmann holds a 40-point lead over Deletraz in the championship standings ahead of a visit to Monza from October 1-2.