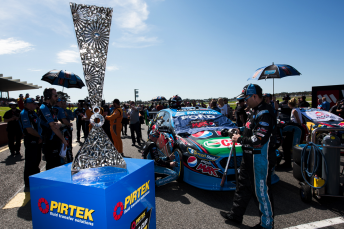 New rules and a host of fresh driver pairings promise to inject more variables than ever into the Wilson Security Sandown 500.

This weekend’s race will see the Sandown 500 run on Dunlop’s soft compound tyre for the first time, provided that Melbourne’s typically unpredictable weather does not intervene.

The strategy puzzle is further complicated by a decision to drop the number of compulsory stops from four to three following economy gains enjoyed by the four-valve runners in recent years.

Triple Eight heads into the race as strong favourites thanks to a recent run of form that has yielded seven straight victories.

Prodrive took a one-two at Sandown last year and also has strong line-ups in the form of Mark Winterbottom/Dean Canto and Chaz Mostert/Steve Owen.

The Holden Racing Team meanwhile showed signs of a resurgence last time out in Sydney and will likely be led by its James Courtney/Jack Perkins pairing, which won on the Gold Coast last October.

Other entries threatening to weigh in on the Triple Eight-Prodrive fight include Scott McLaughlin/David Wall (Volvo), Will Davison/Jonathon Webb (Tekno Holden) and the DJR Team Penske entries of Fabian Coulthard/Luke Youlden and Scott Pye/Tony D’Alberto.

Nissan Motorsport and Brad Jones Racing will have to turn around poor recent Sandown form in order to make an impact, although both can be encouraged by flashes of speed during the current season to date.

Which pairing do you think will take out the Wilson Security Sandown 500? Cast your vote on this week’s Pirtek Poll below.