Garry Rogers has confirmed that his eponymous team will take legal action over Volvo’s decision to pull the plug on its Supercars involvement.

The 71-year-old told Speedcafe.com that he has elected to proceed with legal action after ongoing efforts to discuss the matter with Volvo’s global management failed to yield a response.

Volvo’s head office shocked Rogers and his tight-knit squad in May when it announced that it would not renew its factory backing of the team at the conclusion of the current season.

A follow-up statement from Volvo’s racing partner Cyan, which supplies engines to GRM, claimed it would “bring back our engines and race cars to Sweden after the season ends”.

GRM subsequently sent a formal request to have the withdrawal delayed for 12 months in order to allow it time to source a replacement manufacturer partner with which to continue racing.

The request was sent via Volvo Car Australia, which had publicly expressed disappointment over the original decision.

Speaking to Speedcafe.com today, Rogers said that he has received “nothing from Volvo” in Sweden and claims that “they’ve just gone into meltdown” over the situation.

“On the information we’ve received from our legal people we’ve now got everything we need to contest the decision,” Rogers confirmed.

“We will now be proceeding and looking for a result.”

Rogers declined to comment on the specifics of the proceedings, including which arm of Volvo it will be aimed at.

“It will all come out when we present our case,” he said.

“Our legal people have presented it to us and we signed it all off on Friday. We know exactly where we’re going.

“They’d been ignoring us. We’d given them a fair chance and you can do no more than give people a fair chance.

“From a complete lack of any discussion it’s left us no alternative other than to do what we’ve done.

“We’re not legalistic people but the fact is we have a business to run and there are 36 people here that depend on my judgement to make sure they are employed every week.

“I’d be very surprised if we didn’t have these cars and engines (next year).” 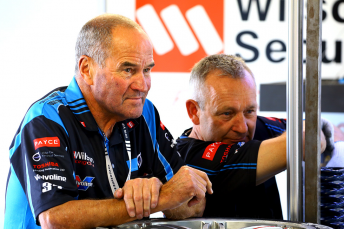 Rogers indicated that the legal proceedings will focus on gaining access to a supply of the Volvo Supercars engines.

Despite the statement from Cyan, Rogers insists that his team should be able to continue to field its current chassis with the S60 bodywork attached.

“The agreement clearly states that the car is ours,” he said.

“All of that discussion about the cars… when you read the contract there’s no mention of that.

“There might be certain panels that may belong to them, but the Car of the Future chassis and everything that we’ve done is ours.

“We are the first to understand that they have supplied the engines as part of the agreement, (but) we don’t want to go down the road of running these cars with different engines.

“We would have to re-homologate the cars. We’d need to apply to Supercars to accept an amendment to the homologation which is all very costly and time consuming.

“From what we see it’s a totally unnecessary matter to have to do. But if we’ve got to do it then believe me we will.”

Supercars CEO James Warburton has been vocal in his support of GRM, which has competed full-time in the category for the last 21 seasons.

Warburton told Speedcafe.com in July that he hopes Volvo will “do the right thing”.

“If Garry Rogers wants to run those cars for one more year there is absolutely no harm in letting that happen and it should happen,” said Warburton.

“Ford are out of the sport and they continue to support six cars and the effort of those teams.

“I think Volvo has an obligation to Garry, to the team and the sport to do the right thing and end it well.”