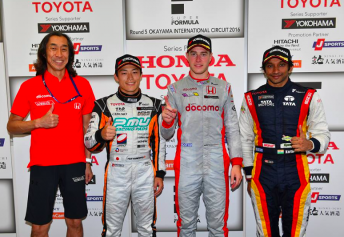 The former GP2 Series champion surged into the lead on lap 2 after passing pole-sitter Yuji Kunimoto.

Once in front the Belgian controlled the race before going on to take the chequered flag by 4.79s from Kunimoto, while former F1 driver Narain Karthikeyan was third.

Championship leader Yuhi Sekiguchi missed out on the points in 13th position.

Kunimoto moved to the top of the championship standings with an impressive drive to victory in Race 2.

The Inging driver pitted in the early laps which proved to be an inspired decision.

A strong stint following the stops saw Kunimoto emerge in the lead, although he faced a challenge from Kazuki Nakajima.

Despite the threat, Kunimoto held on to claim victory by 1.16s from Nakajima with Hiroaki Ishiura finishing third.

Kunimoto holds a 4.5 point lead in the championship ahead of the penultimate round at Sugo from September 24-25. 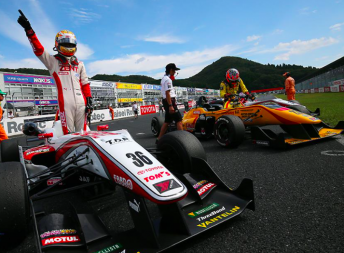 Kenta Yamashita has closed to within eight points of the lead in the Japanese Formula 3 Championship after the penultimate round at Okayama.

Takaboshi went one better in the second encounter as he took the victory by 15.85s from Sena Sakaguchi.

Tadasuke Makino finished third ahead of Tsuboi with Yamashita in fifth.

The Race 1 winner made further inroads on Mardenborough’s lead as the Brit came home in eighth position.

The championship heads to Sugo for the final round from September 24-25.