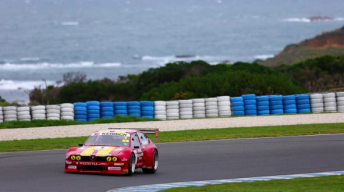 A trio of second places behind the dominant Jack Perkins was enough for Ricciardello to secure the title with one round remaining.

Perkins, whose title prospects were shot with a series of reliability issues earlier in the season, underlined his speed but setting new qualifying and race lap records.

Alfa driver Ricciardello expressed his pleasure at wrapping up the title a round early but admits he’ll need to step up to beat the John Gourlay owned Audi next year.

“It is an amazing feeling (to take 10 titles), it is pretty big,” said Ricciardello.

“It has been a big journey for us and I think the car has made its mark in the history books.

“The other thing too is that the car was built in 1992, so it has done a pretty good job!

“She is getting tired, but it has done a good job. It has probably lost its teeth and got dentures now but it is still going and we are still at the head of the pack.

“At the same time though, we need to move forward. Jack Perkins and John Gourlay with the Audi have lifted the bar again so we want to get a direction sorted to aim for.”

Daniel Tamasi finished third for the round ahead of Queenslanders Colin Smith and Steven Tamasi.

The Sports Sedan season will conclude at the Shannons Nationals finale at Sydney Motorsport Park on November 11-13. 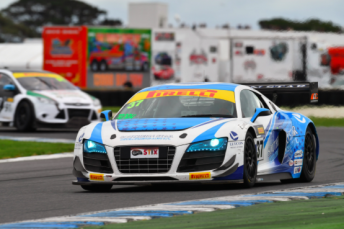 Taylor survived a late Safety Car restart to win Race 2 from Kane Rose, but placing third of the Trophy runners was enough for Smith to secure the crown by just six points.

The morning’s race had been declared a non-event after a lengthy delay following a collision involving ‘Candyman’ Travers Beynon.

Beynon spun his Audi at Turn 2 before being collected head-on by Jake Camilleri’s MARC Mazda.

Both cars returned to the track for the second race, with Camilleri finishing an impressive third on the road behind Taylor and Rose. 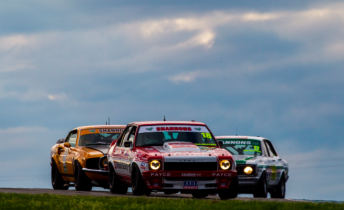 John Bowe extended his lead in the Australian Touring Car Masters Series with a pair of Sunday wins.

Adam Bressington was a maiden round winner in Pro-Am thanks to a trio of strong performances that included top five finishes in the opening two races.

The ProSport class saw Adam Garwood take the win for the round and extend his class lead.

The Touring Car Masters will now head to Bathurst, for their penultimate round for the 2016 season. Jacobson’s Race 3 win came despite a spin on the second lap of Race 3 that saw him drop to fourth place.

It was a tight battle for the rest of the podium, with Tyler Greenbury taking second place ahead of Brad Jones Racing’s Joshua Smith.

The Kumho Tyres V8 Touring Car Series will head to the Muscle Car Masters in October for the final round of the season. 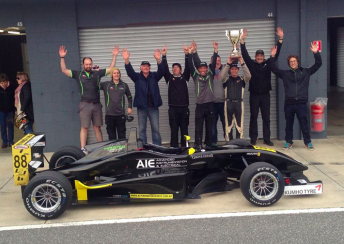 Tim Macrow became the first three-time winner of the Australian Formula 3 Premier Series by scoring the round victory at Phillip Island.

Macrow had a new challenger in today’s final race, with Cameron Shields stepping up to battle the Formula 3 veteran.

Shields was second for the round on debut in the Premier class ahead of his Gilmour Racing team-mate Chris Anthony.

The year though, belongs to Macrow, who returned to the class this season with Dennie Rumble’s Alpine squad.

“It’s been a great year for the team, which is essentially a new team, running an older-spec car,” said Macrow.

“Alpine Motor Sports have done a great job all season, and it was great to cap off the title with a perfect score to seal the deal.”

In the National class Nathan Kumar claimed the win, with Shane Wilson extending his Kumho Cup lead with a win.

The Australian Formula 3 Premier Series returns to the Nationals at Sydney for their final round of the year.

The fourth round of the Australian Sports Racer Series saw a new winner, with West’s Aaron Steer taking the final race win and securing the round win.

Roger I’Anson’s run of 10 straight race wins came to an end thanks to a tyre failure in the finale.

Mark Laucke enjoyed a strong comeback after his fiery exit at Queensland Raceway, taking second for the round ahead of the brightly-coloured West of John-Paul Drake.

John Morriss was the first home of the Radicals, finishing fourth outright ahead of fellow Radical racer Peter Johnston.

The Sports Racer Series will also conclude at Sydney Motorsport Park in November.