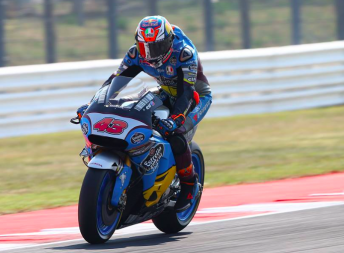 Jack Miller has been ruled out of the San Marino Grand Prix due to an ongoing hand injury.

The Marc VDS Honda rider sustained fractures to his T6 vertebra and his right wrist and hand in a warm-up crash at Austria’s Red Bull Ring in August.

The injury forced the Queenslander to miss races in Austria and the Czech Republic before making his return at last weekend’s British Grand Prix.

Despite taking part in practice and qualifying at Misano, the 21-year-old, who was due to start today’s race from 17th, has withdrawn due to pain from the injury.

Miller joins Andrea Iannone on the sidelines after the Italian fractured his T3 vertebra in a crash during Free Practice 1 this weekend.

Jorge Lorenzo sits on pole position for tonight’s race, which starts at 2200 AEST.