Lorenzo takes pole with ‘best lap of my life’

Lorenzo takes pole with ‘best lap of my life’ 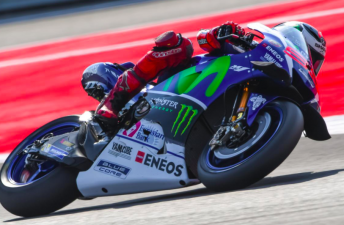 Jorge Lorenzo has lowered his own Misano qualifying lap record on his way to pole position for the San Marino Grand Prix.

Lorenzo will share the front row with his Yamaha team-mate Valentino Rossi and Suzuki’s Maverick Viñales.

The Spaniard was never headed after clocking his first timed lap, before lowering his own record on his second flyer.

Lorenzo then emerged as the first man to lap the circuit in the 1:31s bracket during his second run.

“The bike was moving so much, so I thought, ‘Okay, maybe I’m too aggressive and I’m going to be slower than the previous lap,’ but I was faster.

“When I crossed the finish line I saw this 1:31.8s. I was delighted and very proud.

“I rode one of my best laps, maybe the best lap of all my life.”

Lorenzo’s pole sees him become the first man to score 64 grand prix pole positions having been tied with both Rossi and Marc Marquez prior to qualifying.

Rossi suffered a scare when he lost his then-best time late in the session due to exceeding the track limits, dropping from second to seventh.

However, the Italian quickly made amends to start from the middle of the front row at his home circuit.

Viñales lines up third on the grid just as he did at Silverstone last weekend, where he recorded a maiden win.

The 21-year-old edged Marquez (Repsol Honda) back to the second row alongside the factory Ducatis of Michele Pirro and Andrea Dovizioso.

Despite ending FP3 in ninth, Pirro had to come through Q1 after switching from his wildcard entry to Andrea Iannone’s bike.

Iannone was declared unfit to compete in the remainder of the weekend after suffering a fractured vertebra following a crash in Friday’s opening practice.

Jack Miller ultimately qualified 17th on his Marc VDS Honda despite sitting last after the opening run of Q1, bereft of pace and having lost his best lap due to exceeding track limits.

The San Marino Grand Prix will be held over 28 laps on Sunday night from 2200 AEST.

Johann Zarco claimed pole in Moto2 while Australia’s Remy Gardner could only manage a time good enough for 28th position.