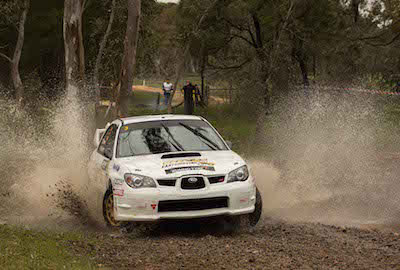 Brendan Reeves has completed a perfect weekend at the Lightforce Rally SA, winning both heats and taking outright victory.

The fourth round of the Kumho Tyre Australian Rally Championship was held in the Mt. Crawford area of South Australia and entailed around 200 competitive kilometres over two days.

Having won at his last two starts, Reeves was the class of the competition all weekend to convincingly take the event and score a hat-trick of wins.

After event organisers were forced to re-route the rally due to heavy rain in the days leading up to the start, Reeves drove a smart race on Saturday to win Heat 1 with a margin of over two minutes. This was despite an exhaust gasket leak which required work overnight.

In today’s second heat, he again dominated, winning five of the day’s six stages in his Subaru WRX, finishing with a gap of 32 seconds to Simon Evans/Ben Searcy (Subaru WRX).

“I really enjoyed the roads today. The fast Shire roads really suit my driving style and the car, so when the organisers had to re-route the event and include more Shire roads, I was really happy!”

“The rally organisers should be congratulated for their efforts in providing a fantastic event despite all the difficulties they had with the weather. We had a ball,” he added.

Reeves is not registered for ARC points but have now won both of the rounds he has contested this year.

With an eye on the championship chase, Evans did not take risks today to take the biggest points haul in the ARC registered crews.

Molly Taylor finished second in the ARC registered crews and was also the runner-up for the weekend overall in championship chase.

Harry Bates repaid his crew with third place outright, after a massive rebuild was required on his Toyota overnight. A crash which caused massive damage to the front-right of his car required all the skills and expertise of the Neal Bates Motorsport crew ensured he was back on the road and very much in the fight.

Arron Windus was another young driver to have his dramas. After a promising fifth place in Heat 1, his Sunday ended up on the roof of his Subaru after avoiding a tree.