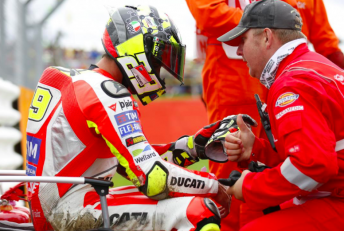 Andrea Iannone is hoping to receive medical clearance to contest the remainder of the San Marino Grand Prix weekend after suffering a fractured vertebra in a practice crash.

The Ducati rider was flown to the Bufalini Hospital following a high speed crash at Turn 13 during opening practice at Misano.

A CT scan revealed a fracture to his T3 vertebra which saw him initially ruled out of the weekend.

However, the Italian rider’s injury has since been declared ‘small and stable’, meaning he will now undergo a further examination to determine his fitness ahead of Saturday’s third practice.

“On the fifth lap of FP1 I lost the front at Turn 13, crashed and began to roll in the gravel,” said Iannone, who was forced to sit out second practice.

“Unfortunately I suffered a compression on my back and the checks showed that the T3 vertebra was cracked.

“The doctors decided to check me again tomorrow morning, before giving me the OK for the race.

“I hope to get some rest tonight and wake up without being in too much pain, because I am really keen on racing here at Misano.”