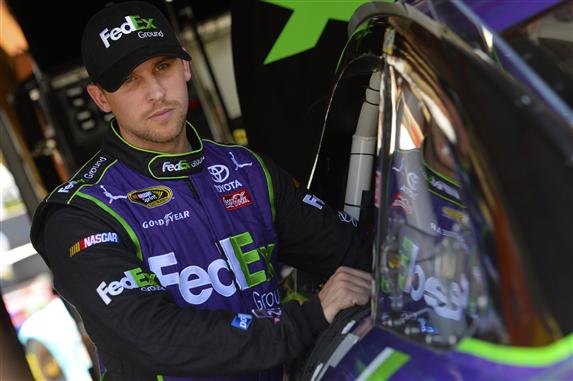 Denny Hamlin will start from the point at NASCAR’s final “Regular Season” race of the season at Richmond.

The Virginia native took his Joe Gibbs Racing Toyota to his first pole of the season, third at his home track and 24th of his Sprint Cup career.

“I didn’t think our car was actually that good but we had speed when we needed it and hope we can translate that into running upfront for a win tomorrow night.”

Ryan Newman, the highest-ranked driver outside the provisional 16-driver Chase grid, will start in the 15th position and needs to either win or rely on McMurray having a disastrous result on what will be his 500th Sprint Cup start.

Pocono winner Chris Buescher, hopes to maintain his position among the top 30 in points to clinch a Chase berth and will start 31st in the Front Row Motorsports Ford. David Ragan, his closest pursuer in the Sprint Cup standings, will start 21st in the 400-lapper.

“At the end of the day, this weekend is about something bigger,” said Buescher after qualifying down the order.

“We are trying to stay out of trouble and be there at the end. It won’t be an easy walk from where we are at right now but we will be able to work our way up.”

Cole Whitt failed to qualify for the 40-car field.