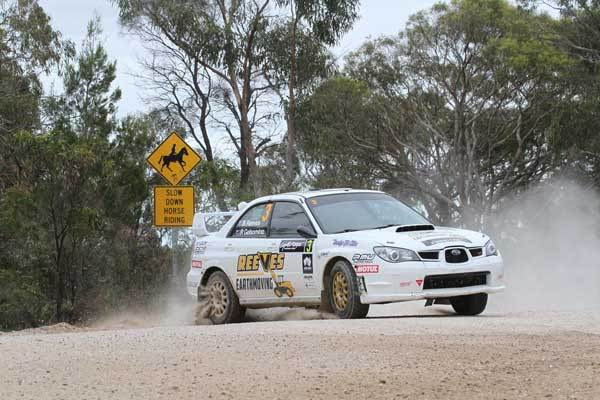 Reeves on the march in South Australia. PIC: Peter Whitten

Brendan Reeves has come back to the Australian Rally Championship in style, taking Heat 1 of the Lightforce Rally SA, round 4 of the title chase.

Reeves set up his winning margin of two minutes 10.7 seconds after setting the pace early, winning the first four stages of the day in a Subaru WRX.

The heavy rain that the Mt Crawford region of South Australia experienced on Thursday and Friday had, thankfully, ceased but the roads were very slippery and caused a number of drivers to come unstuck including championship contender Harry Bates.

There was no such misfortune for Reeves who drove a sensible rally mindful of the road conditions but he did strike some minor trouble on the first of two night stages when he drowned the car’s air cleaner in a watersplash.

An exhaust gasket leak – which melted the steering rack boot and sway bar rubber – also caused some concerns but he was able to push on and take the win.

Reeves’ closest rivals on the day, Simon Evans, also driving a Subaru WRX, hit a kangaroo on the way to the start of the final stage, damaging their car. He could only manage to drive through the stage slowly and record a finishing time.

“We’ve had a good day and enjoyed being back on the South Australian roads,” said Reeves.

“Whilst it wasn’t totally drama free, we stayed on the road and were able to manage the niggling problems we had towards the end of the day.

“The mechanics will fix the exhaust leak tonight in service and we’ll be ready to go again tomorrow.