The Brock ‘signature’ Commodore at Bathurst

A poignant piece of Peter Brock memorabilia has been returned to Mount Panorama for fans to view at next month’s Supercheap Auto Bathurst 1000.

The VZ model Holden that was signed by thousands of grieving Brock fans at Bathurst 10 years ago has been placed in the National Motor Racing Museum adjacent to the circuit. 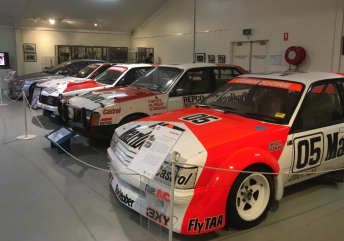 Originally owned by HSV before being sold to a private collector, the car had been in hiding until Peter’s brother Phil and manager Stephen Wyhte recently launched a campaign to track it down.

Leads provided through Facebook instigated contact with the current owner, who has agreed to see the car join a growing display of Brock vehicles in the museum.

Phil Brock told Speedcafe.com that seeing the car during his trip to Bathurst for yesterday’s memorial service was an emotional experience.

“It just looks fantastic,” he said.

“It’s the most emotional thing I’ve seen in a long time.

“You just read the stories on it and think about the emotion that’s gone into that car. 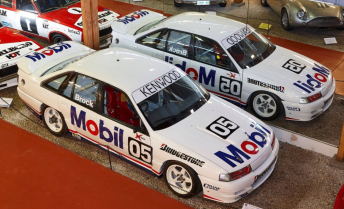 The VN was previously at the National Automobile Museum of Tasmania

“It blows you away to look at it up close. You can look at it for hours.

“Now that it’s in the museum everyone who signed it in 2006 can come back and find their tribute.”

The signature car has been placed alongside a Peugeot 405 that Brock raced in the 1992 Bathurst 12 Hour.

The Peugeot is owned by collector Keith Linnell, who has also recently purchased Brock’s 1991 Mobil VN Commodore for display in the Bathurst museum.

Returning the car to the mainland after a stint in Launceston, the VN was driven by Phil Brock at Phillip Island on Tuesday and will run again at the Sandown 500 before heading to Bathurst.