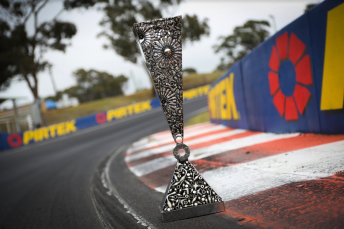 The full driver line-up for the Pirtek Enduro Cup has now been set ahead of the Wilson Security Sandown 500.

Lucas Dumbrell Motorsport’s confirmation that Aaren Russell will partner Andre Heimgartner is the final piece in the co-drive puzzle for 2016.

The most notable changes are Alex Premat’s move from Garry Rogers Motorsport to Red Bull and the internal switch at Prodrive that sees Dean Canto with Mark Winterbottom for the first time.

James Courtney and Jack Perkins completed a single event together last year after the former sat out Sandown and Bathurst due to injury.

Veterans Cameron McConville and Craig Baird meanwhile return for their first enduro campaigns since 2012 and 2014 respectively.

Notables in action 12 months ago but not on the grid this year are Marcos Ambrose, Sebastian Bourdais, Oliver Gavin, Alex Buncombe, Taz Douglas, Ant Pedersen and Alex Davison.

The field will be bolstered at Bathurst by a single Nissan Motorsport-run wildcard for Simona de Silvestro and Renee Gracie.