Chelsea Angelo will return to the Dunlop Series at Sandown aboard an MW Motorsport Ford.

The 20-year-old started the season in Dragon Motor Racing’s ex-GRM Holden, but was sidelined ahead of the most recent round in Townsville after running out of funds. 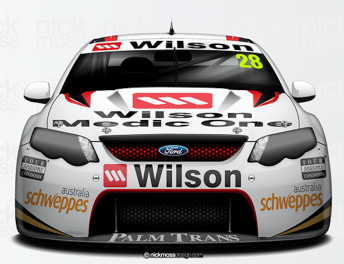 Inking a deal with MWM for Sandown and Bathurst, Angelo’s car will be sponsored by Rush Iced Coffee, which is a sister brand to Ice Break, and Wilson Security.

Angelo tested one of MWM’s Prodrive-built Fords at Winton this week ahead of the deal being completed and is now looking forward to hitting the track at Sandown on September 16-18.

“I’ve been speaking with Matty for quite a while now and together with help from Chris we’ve got the sponsorship together to do it,” Angelo told Speedcafe.com.

“Chris has obviously raced with Matt before and will be acting as a mentor for me.

“I’ve never really had an opportunity to run with good equipment before, so it’ll be a good test to see what I can actually achieve with a good car.

“The laps we did at Winton allowed me to get comfortable and I was able to pick it up quite easily.

“I feel confident with the track as well, so I’m pretty excited to see how I go.”

The news follows this week’s confirmation that Supercars has secured backing for Swiss driver Simona de Silvestro to join the main series next year. 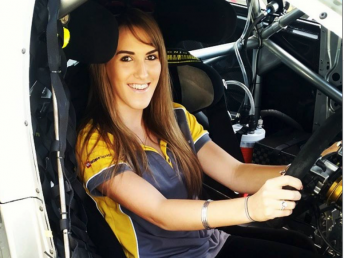 Angelo expects that the widespread attention gained by de Silvestro’s deal will help fellow female racers in their own quests for sponsorship.

“I definitely think it’ll be a massive help,” said Angelo.

“The attention that it’s getting is a great positive for all women trying to make it in motorsport.”

“I’m going to keep expectations in check because it’s hard to jump into a car mid-season,” White told Speedcafe.com.

“From what I saw of the data at Winton there were definitely some promising signs there.

“Realistic if she can be in the top 15 I’ll be happy because it’s not an easy field.

“That will be our target in the short term and we’ll take steps from there.”

Angelo’s car will run alongside the existing MWM entries of Shae Davies and Bryce Fullwood.

Davies has been given permission to continue in the second-tier at Sandown despite also now acting as a primary driver for Erebus in the Supercars Championship.

Other Dunlop Series runners co-driving in the Sandown 500 are Jack Le Brocq, James Golding, Andrew Jones, Macauley Jones and Paul Dumbrell, while Gracie will join the field at Bathurst as a wildcard.