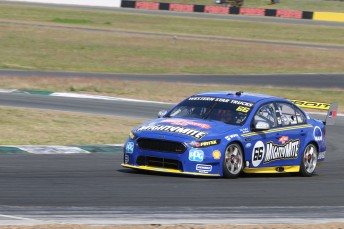 The Queensland-based team has been developing its bespoke device since November last year having been inspired to improve cockpit safety in the wake of Chaz Mostert’s huge crash at Mount Panorama.

Designed by one of DJRTP’s locally based American engineers, the protection tray is similar to that seen in NASCAR and effectively extends the sides of the seat to limit the movement of drivers’ legs during accidents.

Since the initial design was conceived, the squad has been working alongside Supercars’ technical team to further develop the concept.

Today saw months of work come to fruition with DJRTP testing the tray on the track in both of its Ford Falcon FG Xs at Ipswich.

The outing proved successful with the system set to be fitted to the cars for next weekend’s Wilson Security Sandown 500.

Coulthard was impressed by the ease in which he adapted to running the device following it’s maiden run at the Ipswich circuit.

“To be honest I haven’t really noticed it,” Coulthard told Speedcafe.com.

“It is one of those devices you never want to have to test out but the guys have done a fantastic job in developing it and making it user friendly.

“It has been in the pipeline for a long time but to finally have it the cars and get to circulate with it is pretty cool.

“Like anything it could do with a bit of fine tuning but for its first hit-out and with the driver changing practice we have been doing, it hasn’t affected anything.

“In the event of crashes like we have seen Chaz (Mostert) and Lee (Holdsworth) have had, I feel like its going to pay dividends.”

While the device is not currently mandatory for next year, it is hoped that several teams will elect to use the concept.