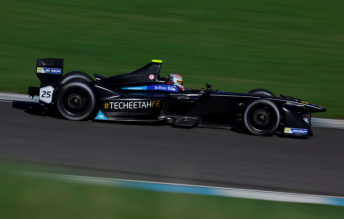 Jean-Eric Vergne continued to set the pace on the penultimate day of FIA Formula E pre-season testing at Donington Park.

The Techeetah driver saved his best until the final minutes of the session when he posted a 1:29.196s to lower his previous lap record at the Leicestershire circuit.

Vergne’s impressive pace came after he suffered a crash in the morning run which brought out the red flags.

The Swiss driver had topped the times at the end of the morning session, surpassing Vergne’s old lap record.

The Abt and Renault squads completed the top-five with Nico Prost fourth and Daniel Abt in fifth.

New Zealander Mitch Evans was the fastest of the Jaguar drivers in 14th position, albeit 1.4s slower than Vergne.

The final pre-season test concludes today ahead of the season opener at Hong Kong from October 9.