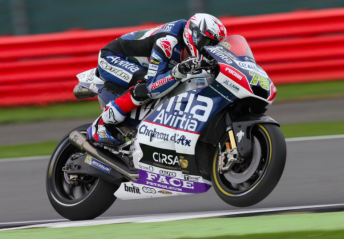 Loris Baz will sit out this weekend’s San Marino Grand Prix after a further examination uncovered a foot injury sustained in a nasty crash at Silverstone.

The Avintia Ducati rider was expected compete at Misano after receiving the all-clear shortly after an accident, which halted the British Grand Prix on the opening lap.

However, the French rider has since undergone a medical examination in Switzerland which has revealed fractures in the lower part of his right ankle and foot.

Baz, who has been cleared of any brain injury, is not expected to undergo surgery, but will be forced out of this weekend’s race.

World Superbike rider Xavi Fores has been confirmed as Baz’s replacement at Misano.

“It’s a real shame and something I wasn’t expecting, but once I arrived in Switzerland I had an x-ray and they found some fractures in my right foot,” said Baz.

“The two main ones are in my talus bone and at the bottom of my tibia. It can’t be operated on, it needs time and rest.

“Therefore it will be impossible to race in Misano. But I still consider myself lucky to not have suffered anything worse in the crash at Silverstone.

“It’s really bad for the team because we were doing really well and getting better and better. It’s a shame, but I’ll try and come back as soon as possible to finish the season the best I can.

“It has been another setback after what happened in Mugello, but I have to be positive and look forward. I hope Xavi enjoys it a lot this weekend.

“MotoGP machines are incredible and I’m sure he’ll do great. As well as that, he has an amazing team, and I’ll be there to try and give him some good advice. I’m sure he’ll enjoy it.”

Pol Espargaro, who was also involved in the Silverstone crash, will race this weekend.