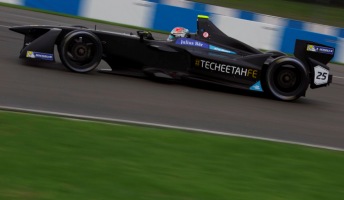 The ex-Formula 1 driver clocked a 1:29.64s effort in the afternoon session held on a drying track.

Vergne’s time, posted in the final hour of the hit out, fell just six thousandths shy of the new lap record he clocked during the first test at the Leicestershire venue last month.

The sister car piloted by New Zealander Mitch Evans was 14th as the new operation completed 75 laps of running with its I-Type 1.

Jaguar is due to announce its driver line-up for its maiden 2016/2017 campaign on Thursday.

The test was interrupted on nine occasions when marshals were called upon to clear debris from the circuit.

The final pre-season test concludes on Wednesday ahead of the season opening visit to Hong Kong from October 9.