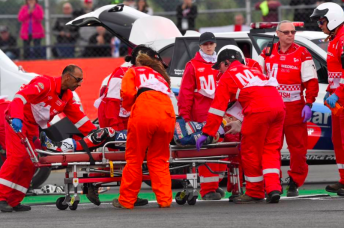 Loris Baz was stretchered away from an opening lap crash at the British Grand Prix pic: Avintia Racing via Facebook

Pol Espargaro and Loris Baz are expected to return to competitive action at Misano this weekend following a nasty crash that ruled the pair out of the British Grand Prix.

The Tech3 Yamaha and Avintia Ducati riders were involved in an opening lap crash at Silverstone which saw Sunday’s race red flagged.

Both riders were stretchered away from the incident before receiving treatment at the circuit’s medical centre, where they were given the all-clear.

Baz has since undergone a brain scan after being knocked briefly unconscious in the crash.

The Frenchman was cleared of any brain injury and is now focussing on making a comeback at Misano.

“It was quite a big scare,” said Baz.

“I don’t remember what happened, until I arrived in the ambulance. According to the first examination, I didn’t have any serious injury.

“As I had a headache at the end of the day, I decided to go under the scanner but nothing came out of it.

“My foot hurts. I also have a nice sprain and also a grazed thigh.

“I am lucky not to have injured myself more seriously and I am sorry for Pol (Espargaro).

“I couldn’t avoid him, I had no other option. It’s a shame because we had the opportunity to do a good race. Now I’ll rest and get ready for Misano.”

Meanwhile, Espargaro continues to suffer from severe pain in his right leg following the crash, but remains hopeful he will be deemed fit to contest the San Marino Grand Prix.

“I must admit that I am feeling a lot of pain all over, and especially in my right tibia but this is not something that I am overly worried about,” said Espargaro.

“I am sure that with some relaxation and massages, I will be fine.”