Ricciardo expects Red Bull to stay ahead of Ferrari

Ricciardo expects Red Bull to stay ahead of Ferrari 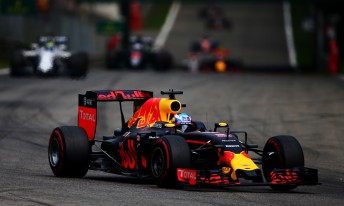 Daniel Ricciardo believes Red Bull will edge Ferrari in the constructors’ standings this season despite conceding points to the Maranello squad at the Italian Grand Prix.

Red Bull produced an impressive damage limitation run at Monza as Ricciardo finished an impressive fifth, while Max Verstappen was seventh at a circuit which favoured Mercedes and Ferrari.

Ferrari made the most of its power advantage to score third and fourth with drivers Sebastian Vettel and Kimi Raikkonen respectively.

Although Red Bull were unable to match Ferrari on pace, the Milton Keynes squad continues to hold second in the constructors’ championship with an 11 point cushion over the Italian marque.

Encouraged by the team’s performance, Ricciardo believes Red Bull will emerge victorious in its battle with Ferrari for the runners-up spot come the end of the season.

“I think it (the battle with Ferrari for second) could go on for the rest of the season,” said Ricciardo.

“This was a damage limitation race for us. We got fifth and seventh so I think we can walk from here pretty happy.

“In the last few races we have finished on the podium so we hope for a top three every race, but realistically Ferrari was going to come in with an edge on us this weekend.

“Fifth was our objective and we got that.

“The next objective is to get some points back in Singapore. I think we will be able to hang on (to second) for the rest of the year if we can maximise the high downforce circuits.”

Ricciardo’s run to fifth saw the Australian produce one of the overtaking moves of the season.

The 27-year-old completed a stunning pass on Valtteri Bottas (Williams) which saw the Red Bull driver come from a long way back to out brake the Finn into Turn 1 with six laps remaining.

“It is up there (as one of my favourite moves),” he added.

“My favourite move is probably the one on Sebastian Vettel I did here two years ago.

“I could see he (Valtteri) saw me in his mirrors. He is normally pretty clean so I knew he wasn’t going to turn in on me. It was good fun.

“I wasn’t convinced I would pull it off but when I did I was pretty happy.”