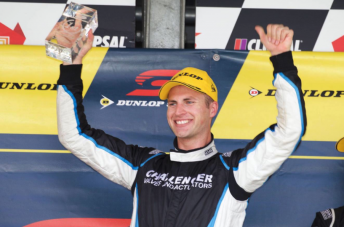 Garry Jacobson will warm-up for his Sandown Supercars duties with a run in the Kumho V8 Touring Car Series at Phillip Island this weekend.

Jacobson is set to race at the Shannons Nationals event with MW Motorsport, driving one of the team’s Prodrive-built Ford Falcon FGs.

The deal comes as the 24-year-old prepares to resume his Dunlop Series title battle with Prodrive team-mate Jack Le Brocq at Sandown on September 16-18.

Jacobson is also understood to be closing on a deal to co-drive with Erebus Motorsport’s Shae Davies in the Pirtek Enduro Cup, making for a busy fortnight.

MW Motorsport team owner Matt White says that with a two month gap since the last Dunlop round, Jacobson will benefit greatly from the Kumho mileage.

“We’ve been in touch with Garry for five or six years though the DVS (Dunlop Series) and we had a mutual contact that was interested in doing something this weekend,” said White.

“We have been keen to get back in the Kumho Series and it’s great to be able to do it with Garry.

“It works for him getting mileage before his next run because there’s been such a big gap in the DVS calendar – so it ticks boxes on multiple fronts.”

Jacobson will line up against Dunlop Series rival Taz Douglas as part of the 16-car Phillip Island Kumho field.

Douglas, who is sixth in the Dunlop standings, leads the Kumho Series by 122 points aboard THR’s ex-Kelly Racing Holden following a run of nine straight wins.