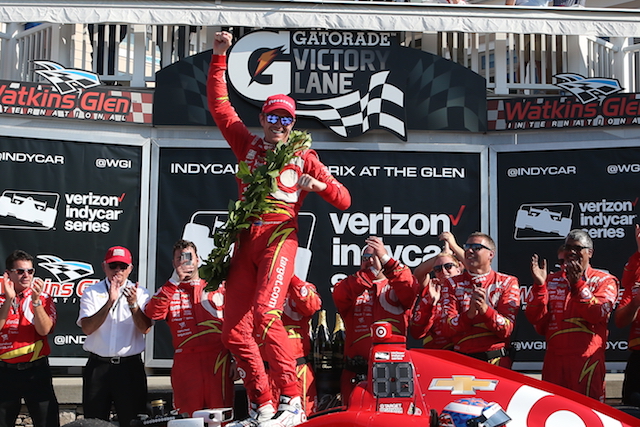 Chip Ganassi stalwart Dixon mastered a fuel strategy challenge to blitz the field and move to fourth on the all-time IndyCar winning list.

James Hinchcliffe (Schmidt Peterson Racing) exhausted his fuel tank a few corners from the finish of the 60 lap race, cruelly robbing him of a podium.

As the leading runners were forced into fuel saving mode, Simon Pagenaud lost a couple of positions inside the final 10 laps to finish seventh.

Chief rival Will Power’s race ended on Lap 39 when he had a heavy hit after an incident from the pursuing Charlie Kimball, with the Australian officially classified 20th.

Power was released from the medical centre but will have to undergo a final clearance ahead of the Sonoma finale in two weeks.

Pagenaud has extended his lead in the series to 43 over Power with a total of 104 available at the double points season ender in California.

The French driver was ordered by his engineer Ben Bretzman to save fuel during the final stint, frustrating the driver as he had to drop a couple of positions.

“I certainly I had to save a lot of fuel to finish the last stint without pitting again. I was yelling a bit on the radio saying, ‘I cannot make these numbers guys’.”

The Team Penske pair are now the only drivers in the running for the title.

Dixon, though, was in rare form all weekend, dominating practice, qualifying and the race.

“I think this was a Chevy Pulse or something it was electric. The fuel mileage was amazing,” Dixon said who donated his winnings to the Justin Wilson kids fund.