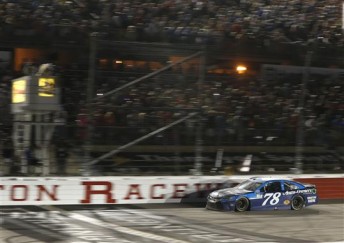 Truex led 28 of the 367 laps to score his second win of the season and fifth of his career.

Pole-starter Kevin Harvick was the dominant driver on the night to lead 214 laps and after a slow pit stop drove through from 12th to finish second.

After winning last week at Michigan, Kyle Larson led 45 laps to finish third ahead of Denny Hamlin and Joey Logano.

“Tonight we weren’t the best car for once and we actually won,” Truex said.

“And we’ve had a lot of rotten luck. It was worth having all that luck if that’s what it takes to get a Southern 500 trophy.”

Truex’s victory also means Toyota has won the season’s biggest races so far in 2016 after Denny Hamlin won the Daytona 500, Truex took the Coke 600 at Charlotte and Kyle Busch was victorious at Indianapolis.

The race celebrated NASCAR’s heritage with just about every car in the field running throwback paint schemes.

There was not too much care taken with the retro looks as numerous incidents on the ‘Track Too Tough To Tame.”

Tony Stewart also had an eventful night that ended with 50 laps to go after his engine let go.

The evening was not a good one for Jeff Gordon, who again subbed for Dale Earnhardt Jr. in the Hendrick Motorsports #88 Chevrolet.

Gordon was never in the hunt on a night where the Hendrick cars again finished with disappointing results.

Next weekend is the final regular-season race at Richmond International Raceway.

The 16-driver field for the Chase for the NASCAR Sprint Cup playoffs will be set after that race.