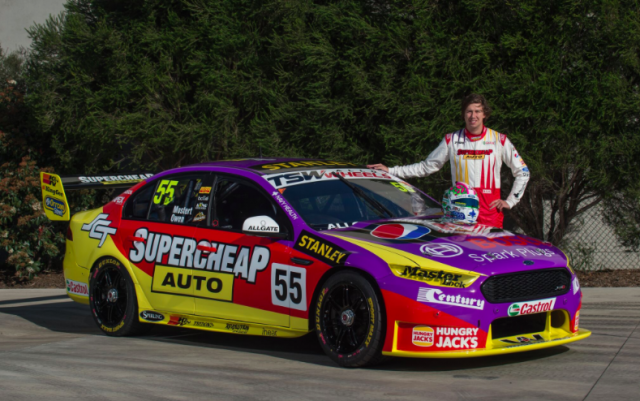 Prodrive is the first team to unveil a throwback livery for Supercars’ retro themed Sandown 500.

Chaz Mostert and Steve Owen will campaign the colours that Steven Ellery raced with under the Supercheap Auto banner in 2002.

The Supercheap scheme is one of several ‘retro’ looks expected for the event, which Supercars has encouraged teams to embrace. The category is emphasising the extensive history of Australian touring car racing at Sandown ahead of what could be the final contract extension for the event before redevelopment claims the Melbourne circuit.

Supercheap Auto General Manager of Marketing, David Bauer says the Ellery livery has been chosen for Sandown due to its memorable purple colour.

The 2002 season was a difficult one for Ellery’s family-run team, with the Queenslander finishing 21st in the standings.

“Supercheap Auto are celebrating 20 years in Supercars next year so we had a range of different liveries to choose from but we felt the 2002 livery with the purple was quite memorable,” said Bauer.

Mostert has scored five pole positions this season but heads to Sandown without a win in over 12 months. The original car, SER2, will be on display at Sandown

“It’s really cool to be able to take a look back through all of Supercheap Auto’s old liveries and have one on our car at Sandown,” said Mostert.

“Supercars has such a long history and to be able to celebrate that with a brand that has been in the sport for as long as it has is really exciting.

“The car looks pretty different with the purple on it but I’m really keen to get it out on the track with my co-driver Steve Owen and give it a good run.

“I’m growing the mo’ back for it. We’ve got some pretty cool retro-inspired race suits to wear too so I’m excited.”

Restored to its original colours by South Australian racer Bruce Heinrich, Ellery’s 2002 Falcon will be on display at the September 16-18 Sandown event.

The car’s history included finishing runner-up in the 2004 Development Series in the hands of Luke Youlden. Prodrive is the first team to unveil retro colours