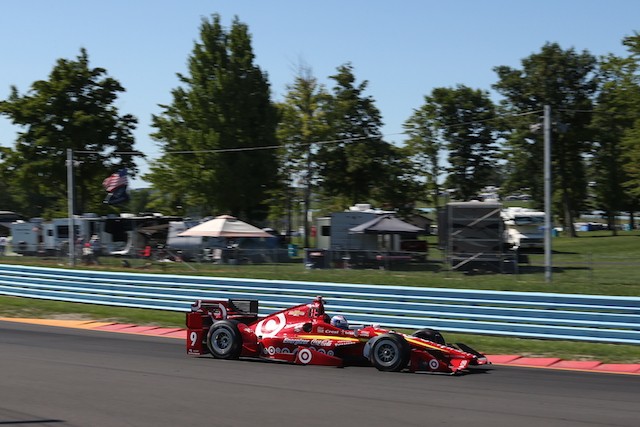 Scott Dixon has secured pole position as records tumbled for the penultimate round of the Verizon IndyCar Series at Watkins Glen.

Dixon set a sizzling 1:22.52s with Power falling a scant .04s short after the Kiwi had set the benchmark in practice.

Australia’s Will Power was given a lucky break by securing a spot in the Fast 6 before claiming a front row berth beside Dixon, a previous three-times winner at the New York state circuit.

Power said his engine died coming out of the last corner ahead of his final flying lap however concedes that his starting position is much better than what it should have been.

“Definitely cost us some time, but starting on the front row is definitely better than where we were,” Power said.

Schmidt Peterson driver Mikhail Aleshin had has two fastest times wiped from Round 2 for interference which enabled Power to leap into the final phase of qualifying after he had originally finished in P7.

Power’s Team Penske team-mate Simon Pagenaud will start from seventh as the Frenchman tries to protect his 28-point lead over the Toowoomba ace.

Pagenaud remains upbeat his his chances after missing  a spot in the Fast 6 by a tiny margin.

“I like our prospects for the race tomorrow, though. We’re in good shape,” Pagenaud said.

Chip Ganassi’s Tony Kanaan was fifth fastest as he continues to keep his hopes of a maiden series title alive ahead of the deciding double points round at Sonoma.

The third Ganassi runner to advance to the Fast 6, Max Chilton, will start from sixth.

Aleshin will now start from 10th position while rookie RC Enerson, in only his second IndyCar start, qualified 11th in the #19 Dale Coyne Racing entry.