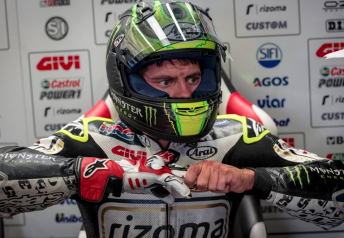 The LCR Honda rider vaulted to the top of the order on his second flying lap as heavy rain doused the Northamptonshire circuit.

Eugene Laverty threatened to upstage the Brit after the chequered flag but instead crashed his Aspar Ducati.

“I’ve had a fantastic welcome this weekend,” said Crutchlow.

“I had great pace in the dry and in the rain I pushed when I needed to and took the pole.

“The last few laps were a bit dangerous so I just cruised.”

Valentino Rossi managed to close to within a second of Crutchlow as rain eased late in the 15 minute session.

The Yamaha rider will start in the middle of the front row alongside Suzuki’s Maverick Viñales.

Dani Pedrosa, like Viñales, set his personal best after the chequered flag and will share the second row with Repsol Honda team-mate Marc Marquez and Laverty.

Marquez briefly took second position late in the session, but then flung himself over his handlebars as he started his next lap.

Laverty went fastest to the second sector with the clock at zero, but the Irishman crashed at Farm corner and was left to settle for sixth position.

After starring in the opening part of qualifying, Jack Miller dropped his Marc VDS Honda on his first timed lap in Q2.

The Australian, who missed the last two races due to a fractured vertebra and wrist, did not reappear and will start from 12th on the grid.

Alex Lowes impressed on his way to 16th on his MotoGP debut as he replaces the injured Bradley Smith at Tech3 Yamaha.

The 20-lap race commences on Monday morning at 0030 AEST.