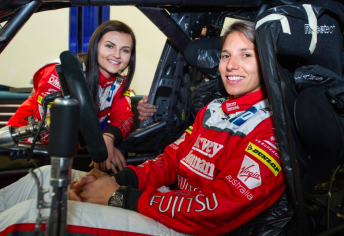 De Silvestro and Gracie will return to Bathurst, but not in a Prodrive Ford

The Simona de Silvestro-led Supergirls Bathurst wildcard is on the move for this year’s Great Race.

Supercars confirmed at last month’s Bathurst event launch that the de Silvestro/Renee Gracie wildcard will return after an attention-grabbing debut in 2015.

Although Prodrive’s deal to operate the Harvey Norman-backed entry had been touted as a two-year agreement, Speedcafe.com has learnt that it will not continue with the Ford squad.

Nissan Motorsport is strongly tipped to take over the running of the Bathurst wildcard as a precursor to a potential full-time program with de Silvestro next year.

The idea of placing de Silvestro at Nissan for 2017 is seen as a sweetener for the marque amid current discussions at global headquarters that will decide its future in the category.

Last year’s debut of the Supergirls Bathurst wildcard proved the power of the female driver program, which is said to have gained a third of the total media coverage enjoyed by the event.

The Supergirls entry was put together as a collaboration between Supercars, which brokered the Harvey Norman sponsorship, and Gracie’s manager Chris Jewell.

A Nissan spokesman declined to comment on the Supergirls entry when contacted by Speedcafe.com, while Jewell insisted that no deal to run the car is currently in place.

“We have options,” Jewell told Speedcafe.com of the Bathurst wildcard.

“We are exploring options and we are nearing being able to appoint somebody as the racing services providers.

“But until such time as we exchange executed agreements nothing is real.”

While Jewell is orchestrating the Bathurst entry for de Silvestro and Gracie, he is not currently involved in negotiations over the Swiss’ possible full-time move into the category.

The prospect of snagging de Silvestro and Supercars’ sponsorship bounty has seen a host of teams directly chasing after the Swiss and her management.

De Silvestro has so far been publicly hesitant to commit to turning her back on international open-wheel racing racing by running in Australia full-time.

Supercars CEO James Warburton confirmed to Speedcafe.com in Sydney last weekend that the category will play a direct role in where de Silvestro lands if she joins the championship in 2017.

“We’ve got to make sure she ends up in the right team,” Warburton told Speedcafe.com.

“Our obligation to the commercial partners is that she can get in and perform well.

“I don’t think there’s any false dawns in terms of how difficult it’s going to be.

“The reason I’ve put a little bit of the commercial package together is because it has to be three years.

“All we’re doing is making it very easy for someone to do it and clearing the pathway in terms of the vision and leadership to make sure it happens.”

With Gracie still earning her stripes in the Dunlop Series, Warburton affirmed that de Silvestro is the only female being considered for a full-time drive next year.

“I think we’re clear about that. There’s one person (de Silvestro) that we’re attempting to secure and after Bathurst we’ll get a read on whether it will happen.”